The players headed off from Edinburgh Airport at an early hour with seven changes from the squad from Leeds, Carly McKinlay, Jenny Jones and setter Lynn Edwards returned along with extra hitting weight in the form of Lindsay Coburn and Anne Morrish.

After an eventful landing at Schipol Airport the players settled into competition mode with a competent training session. Hazel Gow continued her development and got the nod over Lindsay Coburn while Lynn Edwards took over the setting role.

Vc Nesselande from Belgium provided the early opposition and very quickly converted their physical advantage into points superiority.  The speed they played at was stunning and only the hitting power of Linsey Bunten and defensive qualities of Laura McReady kept Scotland in early touch. However in mid set the Belgians added further speed and power to their game and this allowed them to take the set 25-16.

The second set followed a similar pattern and despite running the bench Scotland were unable to contain the effervescent Belgians. Their setting structure and use of speed routes was too much for Scotland and the result of 25-17 was a fair reflection of play.

Back to the drawing board and a regrouped squad to the court against VC Beerse. Scotland were much sharper and a strong serving display allowed Scotland to take the opening set 25-13. The squad introduced Carly McKinlay and Jenny Jones into the rotation and once, more Laura McReady’s consistency and stability in the libero role gave the hitters the opportunity to score. 25-17 and a first win allowed confidence to grow for the next test.

De Burgst quickly dispelled the notion that the Scots were back. They attacked incessantly through middle net and exposed the Scots’ lack of serving focus. Only a backs to the wall defence kept the Scottish side in the game. The pressure was too great and a 25-14, 25-15 loss was hard to take.

So back to leaders Nesselande who followed a pattern similar to the first game with the Scots went down 25-12. A mammoth rebuilding task was established through the hitting of inspirational captain Linsey Bunten and setting from Chrissie Mahon.  Jill Runciman found her “A” game and found holes in a previously impenetrable defence as she thrived on the set provided by Chrissie Mahon. They shocked the leaders and the magnificent Laura McReady and Hazel Gow added points and passes as Scotland strolled to a 25-12 win. The third set saw Klaudia Wieczorek  step up to the plate and display her potential and score at the baseline and the net 15-11 to Scotland and a first defeat for Nesselande.

VC Beerse were next to feel the edge of the Scottish game as they continued their competitive educative. The first set saw them serve the Dutch off the court and finish with a 25-12 win. Complacency stepped in the second and despite a horrendous run of fourteen service errors they had enough to win 25-23.

The final match was to decide second place and the home side were unwilling to settle for anything less.  The game went point for point until 15-15 then the Dutch stepped up their game and swamped Scotland without conceding another point.

Second set was heading the same way until Scotland altered their structure and re-introduced Lynn Edwards. She offered alternatives which the Dutch could not handle and, once more the ebullient Linsey Bunten hammered home the advantage.

Scotland took an early lead through Anne Morrish’s serving but then as to often happens surrendered it through a variety of unforced errors. Next phase saw Scotland take a 12-8 lead and once more self destruct to 13-14. A great effort was required and only fantastic defence by Laura McReady and a gutsy hit by Linsey Bunten allowed Scotland the opportunity to stay in the game. Stay in it they did and two strong serves by Klaudia Wieczorek completed the task.

So, the stage is set for the next tilt at international play and the coaching squad can focus on its job knowing hard work and graft will be done by a competent Team Manager, in the form of Gail Campbell. Leigh Watson has made a valuable contribution on her return and offers a balanced perspective. Dave McEwan continues to build on his sound club reputation and does a wonderful mentoring job with players. There is always someone steps into the breach showcasing a hitherto unknown talent and Malcolm McLean has a future in the movies as a cameraman extraordinaire.

Thanks to all others who contributed a few bricks in the construction of the next generation of Scottish Women’s volleyball. 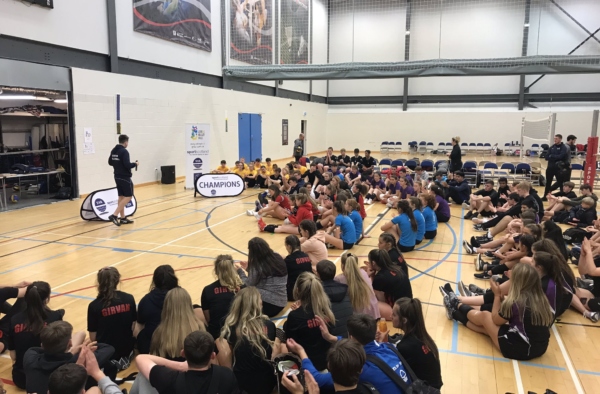