Portobello beach once again hosted another fabulous weekend of beach volleyball. City of Edinburgh Volleyball Club once again found themselves up early on the beach at 7.30am!! on Saturday morning to set up a centre court, 5 nets and a marquee. The weather – most critical of elements for this game – seemed unusually calm, sunny and warm. We were lucky as this was to continue (on the Saturday anyway).

Play got underway with division 1 men and women battling for a place in the semi finals to be played on the Sunday. Division 2 men and women also competed, and lets not forget the mixed 4s who had a ball! The usual barbeque was going next to their court, lots of fun and laughter for all concerned. They loved winning the pineapples!

In division 2, Alasdair King and Pim Frederix took the spoils for the men, while for the women it was Stephanie Shauer and Geraldine Ardoin. In the mixed fours it was NUVOC who came up trumps and they looked truly delighted at the end of the day.

Sunday saw the arrival of the juniors, always great to see, but also the arrival of the rain – less great – but play went on regardless. Thankfully it cleared up towards the end of the day which made playing considerably more pleasant!

In women’s division 1, we were very privileged to have the attendance of former beach volleyball Olympian Amanda (Mo) Glover playing. Despite being dragged out of retirement (kicking and screaming) not having played for 5 years, she had not lost her touch and with partner Mel Coutts managed to beat worthy opponents Eilidh Smith and Claire Penny 21-13, 21-11.

District League play is one of the largely unsung, but hugely important areas of volleyball involvement in Scotland. 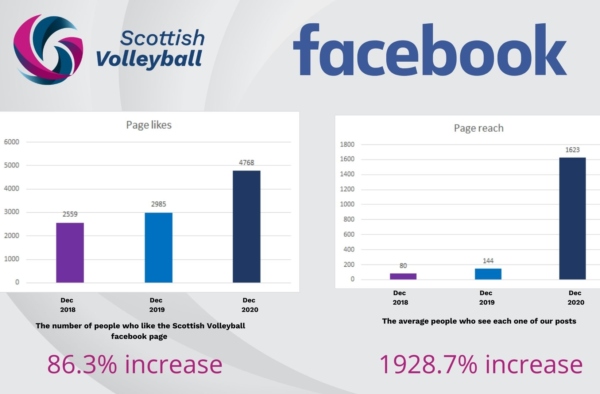 Early in 2020, the team at Scottish Volleyball reviewed how we utilised our digital platforms and social media on…