Traditionally the St Andrews Championships are prepared on the Friday evening, however with this year’s erection of covered seating, marquees and professional PA, Colin Paterson and I were on the West Sands Beach by 0900hrs on the Friday. We positioned and dug in the International centre court, allowing the Byre Theatre production company, Tigerfish, to erect all of their promotional equipment in and around the centre court. Throughout the day and early evening Team Fife members arrived so that by 2030hrs we were prepared. Centre court with covered seating, announcer’s and organiser’s marquee, players marquee, International centre court surrounded by ten  match courts, surround PA, the McPhail trophy collection displayed in front of the stand, Game On.

The Centre court was not designated to any of the preliminary pools, allowing  me to cherry pick matches from every pool to showcase their ability. However the first match on the centre court had to be either Mel Coutts or Graham Riddle, both of them holders of all three previous McPhail trophies. Coin tossed it was Mel and Gillian Lyall against Fiona Kennie and Cathy Smy first on centre court. Mel and Gillian set their standard for the weekend with a 2 sets to 0 win.

There were intriguing matches in all the preliminary match pools on the Saturday, every  mens Div 1 pool had 1st and 2nd seeds and every pool also had possible upsets outside the seeds, like Billy Harris and Iain Harvey, James Jenson and Mo Lopez and Stuart Parker and Sean McCashey. Men’s div 2 had known Beach pairing Iain Cook and Jamie Salvin but there were unknowns Dutch and Maltese pairing Pim Frederix and Simon Borg plus indoor players Phil Arnold with Ally Jack making their Beach Volleyball debut.

Mens Div 2 was scheduled for the first final and the preliminary matches indicated how tough this was going to be, teams had to finish first or second in their pools to progress to cross-over semi finals. Cook and Salvin finishing second to Frederix and Borg 15-13 in the deciding set. The other pool saw 3 teams finishing with the same points. Ricky Diamond and Ben Taylor, Michael Kopac and Artur Kopac joined by Jack and Arnold who took two matches to master the differences of Beach then going undefeated. With sets difference unable to separate these three, it went to points, Ally Jack and Phil Arnold going through to play Frederix and Borg, The Kopac brothers against Cook and Salvin.  Both finalists came from pool 1, Cook and Salvin and Frederix and Borg winning through to the first final of the Championships. The first final had it all, deciding set, controversy and rule interpretation, one where a set ball was blown to drift over the net, I have to admit I was among those who did not know the proper ruling. In the end it was the foreign pairing of Frederix and Borg who won the Div 2 Men’s title.

The march to the Men’s championships saw Jenson and Lopez knock out Paterson and McKeown, Krawczyk and Chudzik knock out Robertson and Nadroski then final by knocking out Watt and McNab. In the other semi final Jenson and Lopez were knocked out by No 1 seeds McGuigan and Riddle.

Konrad and Marius appeared to be the most powerful pairing on the Beach however Riddle and McGuigan are just too good to allow anyone to dominate them with big hitting. A great final watched by the biggest non volleyball playing crowd saw McGuigan and Riddle win 2 sets to 0.

Gillian and Mel were certainties for the women’s final. Who would join them was not so clear cut. In the preliminary pools Shelley Paterson and Claire Penny had defeated Lilian Lieber and Sarah Naumann however when they met again in the semi finals the German girls reversed the 2-1 result from the preliminary match to progress through to the final. Coutts and Lyall are the strongest pairing in the country, and although the German girls played fast dynamic volleyball even they were unable to wrest a set from Mel and Gillian, 2-0 to the Scots girls.

Although we are only half way through the domestic volleyball season, the student volleyball calendar has seen most of… 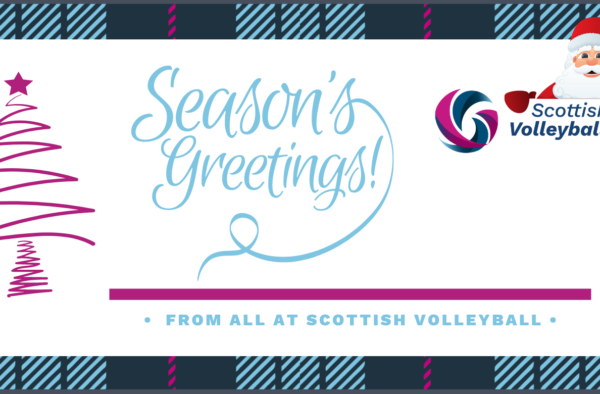 The SVA Offices will be closed from today, Friday 18th December, we will be re-opening Monday 11th January 2021. We…