Following on from their participation in the Ligue Nationale de Volley in France last season, Scotland’s three International referees – Grant MacIntyre, Brian McDougall and John Swan – have been invited to referee in The Netherlands this season. Peter Scheffer extended an invitation on behalf of the Netherlands Volleyball Federation (NeVoBo), continuing the training programme established by the CEV in the run up to the 2012 Olympic Games in London. All three referees will officiate five matches between now and March 2011. The first one was on 2 October when Grant travelled to Amsterdam to take charge of the Men’s B-League game between Taurus and Fusion. Brian is next to go on 16 October for the Men’s A-League game between Zadkine and Webton whilst John has his first appointment in the Women’s A-League on 23 October when King Soft take on Amstelveen.

Grant MacIntyre said “The experience last year in France was tremendous and I am indebted to Patrick Rachard and everyone from the French Volleyball Federation for giving the GB referees the opportunity to participate in their National Leagues. Furthermore, the feedback and assistance we were given by Patrick and others will stand us in good stead for the future. Now NeVoBo have stepped forward to continue our training programme which, once again, is very much appreciated. Five games does not sound a lot but when you are refereeing at a high level regularly with observation and feedback by knowledgeable people like Peter Scheffer, you can’t fail but to improve.”

Brian McDougall said “After the successful experience of refereeing in the French Pro League last year, this will be a great opportunity for us to continue to obtain top quality matches on a regular basis. I have refereed in Holland in CEV competitions on many occasions and have always been impressed by their professionalism and generous hospitality. To have Peter Scheffer, who himself refereed at 3 Olympic Games, arranging all the matches for us and being one of the Jury members is a massive bonus for us. His wealth of experience will be a great asset.”

John Swan added “I would like to thank NeVoBo for granting me the opportunity to referee in the Dutch Leagues this season. Also I would like to thank Peter Scheffer for the personal time he has put in to organise the appointments for all of the British referees. I am really looking forward to the challenge of refereeing in one of the top leagues in Europe and also with working with my many referee friends in Holland.”

Sandy Steel, Chair of the Referees Commission, SVA and President of the Rules of the Game Commission, FIVB commented “A fabulous opportunity and recognition of the quality of our International referees. A huge thank you to the French Federation and in particular Patrick Rachard for last year, and the same thank you to Peter Scheffer and the Dutch Federation.”

Jim Berryman, President of the Scottish Volleyball Association, had the final word: “What great news this is. Not only will our top referees gain invaluable experience of the highest quality in the season ahead but their Olympic dreams take another huge step closer to becoming a reality. I’m sure that everyone involved in Scottish volleyball will join me in wishing John, Brian and Grant every success.  I have no doubt that they will do us proud.” 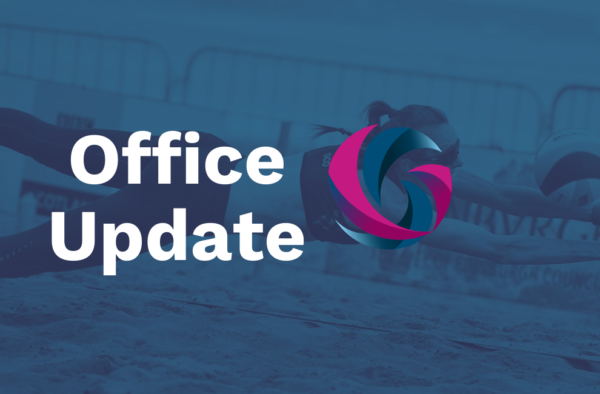 Due to the Small Countries Association Zonal event taking place this weekend in Ayr, the office will be closed…
Beach General 6th May 2011