As the National Olympic Committee for Great Britain and Northern Ireland, the BOA, among its many duties, is responsible for approving the eligibility and entry of all British athletes who compete as members of Team GB at the Olympic Games.

For the London 2012 Olympic Games, the BOA has stipulated that any sport seeking to utilise a Host Nation Qualification Place must first demonstrate the following:

1) The ability to deliver a credible performance during the London 2012 Games.

2) A long-term strategy to deliver a meaningful legacy as a result of the profile and visibility associated with competing in the Games, with a particular emphasis on increasing opportunities for participation by athletes, coaches, officials and volunteers at the grassroots level.

The decision to permit the British Volleyball Federation, which is the National Governing Body for volleyball in Great Britain, to utilise the Host Nation Qualification Places was made by the Olympic Qualifying Standards Panel, which among others includes Hunt; the Chair of the BOA Athletes Commission Sarah Winckless; and the BOA’s Director of Sport Sir Clive Woodward.  The decision was made following detailed consultation with the British Volleyball Federation.

The Olympic Qualifying Standards Panel is currently working with the National Governing Bodies to finalise and approve the qualification standards and pathway to London 2012 for every sport.  In many cases, sports will qualify for the Games through their performance in specific international events.  For a select group of sports, however, the qualification process may involve the use of a Host Nation Qualification Place.

The British Handball Association is the next priority in determining whether or not to use a Host National Qualification Place, based upon notification deadlines set by the International Handball Federation.

BOA Chief Executive and Team GB Chef de Mission Andy Hunt:
“Our objective is to be as inclusive as possible, as it is our aspiration to have the largest team in over a century representing Great Britain at home in London 2012.  Equally however, we understand that the British public expects every athlete who competes for Team GB to be capable of delivering a credible performance during the Games.  Significant public investment has been made in preparing British athletes for London 2012 and beyond, and it is entirely appropriate to expect our Olympic athletes will have the ability to be competitive in sports in which, historically, we have not been strong.   It is also appropriate to expect that London 2012 will not be a singular moment in time, but rather a launching pad from which every National Governing Body can implement a long-term strategy to support the continued growth and development of their sport.

“Every athlete we take to the Games requires a commitment of resources and support from the BOA, and we have a responsibility to make certain our finite resources are being utilised in a manner that benefits all Team GB athletes – from those who compete in sports in which our medal prospects are particularly strong, to those who compete in sports in which we are making our Olympic debut.

“We are delighted to see that British Volleyball has put in place a plan to ensure that the men’s and women’s indoor teams representing Team GB are capable of delivering a credible performance in London 2012, and will utilise the unique platform of a home Games to inspire the next generation of volleyball participants.”

Richard Callicott , President of the British Volleyball Federation:
“I am absolutely delighted that the British Olympic Association has determined to enter the Great Britain’s men’s and women’s teams in the London 2012 Olympic Games as part of Team GB.

“The programmes for both teams has involved 173 full International matches since its inception in 2006 and we have developed exciting young talent with 20 men and 17 women now playing in over 24 different professional club sides in Europe and North America.

“It is a magnificent step on the road to London 2012, and a sign that volleyball in this country is moving forward. The sport has shown a tremendous solidarity between the Home Country Associations, and our coaches have set very high standards.

“We will demonstrate that GB can compete with more than just a credible performance.”

Lynne Beattie, Captain of the GB Women’s Volleyball Team, currently playing professional club volleyball for Cedat 85 San Vito in Italy:
“It’s fantastic news to hear that we are going to compete for our country at London 2012 after all the uncertainty of the past few months. We have been dedicated to that dream for the past four years and giving up that dream was just unthinkable for all of us. But we are well aware that this is just the beginning of our next battle. Our focus now is to produce the best-possible performance in London, for
the public, for the sport and for the legacy we would love to leave behind for the next generation.”

Ben Pipes, Captain of the GB Men’s Volleyball Team, currently playing professional club volleyball for Langhenkel Volley in the Netherlands:
“The verdict from the BOA is a massive victory for British Volleyball and for all the staff, coaches, and players alike. It is the sum of years of training and torment in the pursuit of our collective dream of taking volleyball to London 2012.  Today will etch a mark in British Volleyball history as a day our sporting peers and heroes said yes to us, our dreams, and legacy hopes for volleyball in Britain’s sporting future. To be a part of the Team GB family is a massive honour. It comes with high demands and expectations, but we are ready, able and proven in meeting these demands.

“By making this decision, the BOA have opened the doors to more than just those athletes good enough to make the final cut for the respective volleyball disciplines. They have opened the gates to all of those who have inspired, supported and nurtured the paths of those athletes.  Walking out onto that court and becoming an Olympian is my life-long dream. Volleyball is my life and I want to see it grow from strength to strength in Britain.”

Scotland’s Volleyball teams from both the East and West, across Boys and Girls shared success at the Youth Sport… 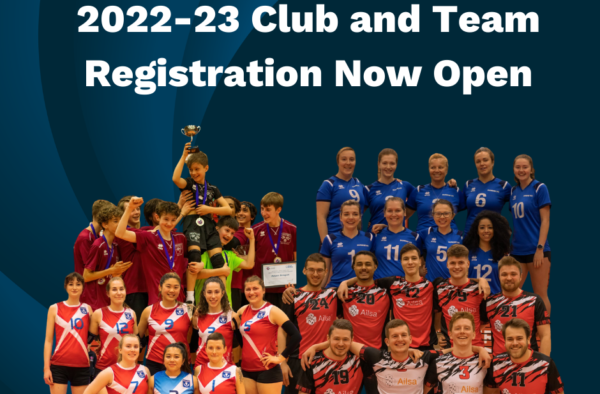