While the main fare of the 17th and 18th December was the internationals involving Scotland senior men and England and Scotland Young Seniors against their Northern Ireland equivalents, the Scotland Young Senior Women were out in playing force over the same period at the Kelvin Hall. The Scottish Volleyball Association through Margaret Ann Fleming had generously given 3 time slots to the group and Jen Dowens the International Events Manager and her excellent team kindly accepted the additional difficulties of fitting these time slots in to her already very busy event schedule.

On Thursday the 16th a Scotland under 20 select took to the Taraflex international court to play their under 18 counterparts. The older girls won narrowly by 2 sets to 1 but more importantly the quality of volleyball on display was a credit to this group of players. Tough serving, strong defensive play, powerful hitting and setting variety were all vividly on display.

Friday 17th saw vastly experienced coaches Ian Goswell and Richard Trump bring a North of England under 15 squad to Glasgow. The Scots girls were very inexperienced at this level but still managed to win the first set of an engrossing encounter. The second and third sets, however went comfortably to their English opponents who showed quality of movement and tough services that the Scottish girls can not yet match. Still, there was much to be pleased with in this first competitive outing for this group of Scottish players who showed skill in some store and a great attitude. It is excellent that we have managed to bring this group in to the young seniors fold at such an early age.

On the same day, immediately after the under 15 match a small group of players of 16 and under were added to the under 15 group and they had a bounce match against the English girls.

On Saturday the 18th the Scotland West under 20 side took on the under 20 East of Scotland team. Like Thursday’s encounter this was a match full of skill, endeavour and excellent attitude. The girls were left to their own devices to get on with the game with no coaching from the sidelines, no substitutions within a set and no time outs. The personal and team organisation and the composure that the young women showed during this match was exceptional and it was a commendable reflection on the work that they and their coaches have put in over the past few years.

The number of players who made themselves available for these 3 matches was fantastic and it almost goes without saying that future of Scottish Volleyball is in great shape if these girls stay with our game and continue to improve at the expected rate. It is a challenge to the Scottish Volleyball Association and the programme coaches to provide opportunities and challenges to keep everyone of these players in our game. Some of the players were there for all 3 days, some for 2. All made the journey to the matches in very inclement weather. Some travelled by public transport from the other side of the country.

Over the course of the 3 days, 38 young seniors took part in the 3 matches. Well done to you all.

A small band of young referees officiated over the 3 days ( all under 16 year old ). A big thank you goes to Belmont Academy pupils Lorn Shanks, Stuart Morrison, Harry Briggs and Matthew Russell whose performances were perfectly understated, controlled and therefore outstanding

Finally, a thank you to coaches, Tom Rooney, Aileen Hall, jenny Krawczyk, Gordon Cree and Malcolm McLean who all gave their time to these teams and events. 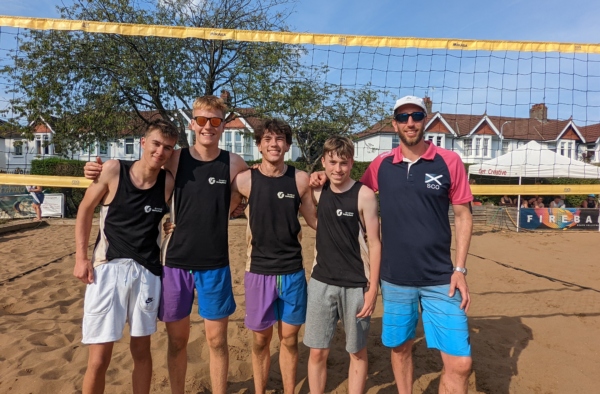 After two years affected by Covid-19, it was great to see lots of Juniors back on the sand at…