The Olympic hopefuls face group leaders Slovenia in a double-header on Friday (2pm) in front of a sell-out crowd and on Saturday (4pm) seeking to hand their opponents their first losses of the campaign.

Pipes has led his team to victories over Croatia and Belgium in successive weeks but, in both weekends, GB’s opponents have come back to win the second half of the double-header.

It leaves GB in second place behind Slovenia who are emerging as early favourites to win the entire competition after four wins out of four.
But they showed their vulnerability by dropping two sets to Croatia last weekend and just winning the tie-break set.

“This is a brand new week,” insists Pipes, “The guys are excited we’re back at home and playing to a sold-out crowd. We’re looking forward to fixing the problems that we have and being able to play to our match plan for two matches in a row. We just didn’t play to the match plan in our second game against Belgium.”

“That’s the nature of the beast in the European League, you don’t know whether you’re up our down from one week to the next but you always have the next week to fix it.”

Tickets are still available and can be bought at the door for Saturday’s clash and Pipes is hoping for two sell-out shows to boost the team’s hopes of reaching the Final Four.

“We saw in the first match against Croatia that there is a real conncection now between the crowd and the team and the great atmosphere that day helped us come back from two sets down to win,” he points out.

Head coach Harry Brokking has seen his team scale the heights this season, including a sensational friendly win over China’s world championship side.

But his young squad can be frustrating at times as they strive to mix with the elite ahead of their Olympic debut in London next year.

“You’re afraid of it because it’s a young team and one day they can be everything and the next they can be nothing,” he states. “It’s not tiredness, it’s just the lack of experience of young players. In the second match against Belgium, we were 8-5 up in the third set and we lost our focus and lost four points in a row and we lost the initiative.

“A young team cannot hold it’s concentration for so long and that is what we have to work on.”

But he knows his side, which have grown up from nothing in the past three years, are also hugely talented and can hold their own in any company. “We still have Mark Plotyczer to come back after injury and I can bring Jason Haldane back so it gives me a group of 18 really competitive players.

“This summer we have to make a big step and we have to beat teams. Beating China was very nice but we have to beat others to show the rest of the volleyball words that our guys are coming. That’s the signal we have given this week by beating China’s starting line-up from the World Championships.

“Beating them shows how much talent we have and have much progression we have made.

“To then beat a big, strong team like Croatia after being two sets down shows that you cannot break this side. We have a lot of talent and a lot of character and that’s a winning combination.”

Tickets:
BUY ONLINE following the link below (from 1 March) On the day prices will be £8 for adults, and £4 concessions (U16, students and senior citizens) 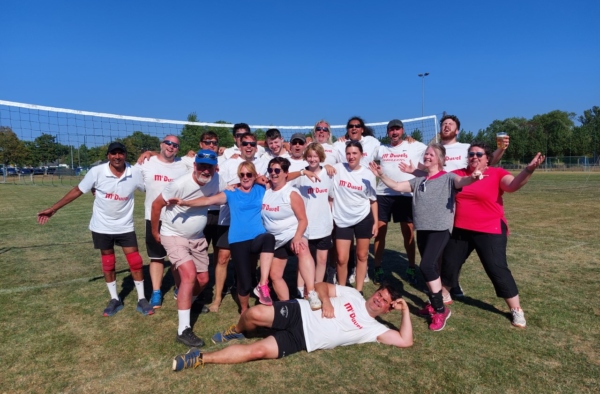 The sun beat down all weekend on the white skins of the 12 Perth, Kinross and Fife volleyballers who…
General 12th September 2016

There is an exciting opportunity for junior athletes to get some additional coaching on. The SVA are running…