SVA ‘rides’ down the Royal Mile

To mark the opening of the fourth session of the Scottish Parliament, The Riding down the Royal Mile, Edinburgh (a traditional Scottish Parliament procession) took place this morning.  Individuals and organisations from all over Scotland were invited to participate in the event, with the aim of showcasing the best Scotland has to offer before the new session begins.

One of these organisations was ‘Glasgow 2014’- the organisers of the 2014 Commonwealth Games- as this extraordinary event takes place within the next session of the Scottish Parliament. This involved displaying the flags of the 71 countries who compete in these Games, and the impressive Commonwealth Games logo.

Scottish Volleyball too had a presence, albeit not so prominent as that of the samba or pipe bands, in the form of Emma Girot and Grant MacIntyre, flagbearers for the day.

Grant said ‘I’m really looking forward to the Commonwealth Games in 2014, it’s just a pity that volleyball isn’t one of the sports that the Scottish public will get to see on this fantastic stage in Glasgow’.

‘The Commonwealth Games allows great development opportunities for players, coaches and referees whilst striving to become part of ‘Team Scotland’. We can only hope that volleyball will be included in future Games’.

Emma said ‘Being a part of the Riding really was a great experience to celebrate the Scottish culture. As for Glasgow 2014, it was nice to see that people from all backgrounds: from Commonwealth sports, non- Commonwealth sports and those not from any kind of sporting background will be working together to make the Games a resounding success.’

On the weekend of the 4th and 5th of November, the Scotland Junior Women’s squad hosted their North West… 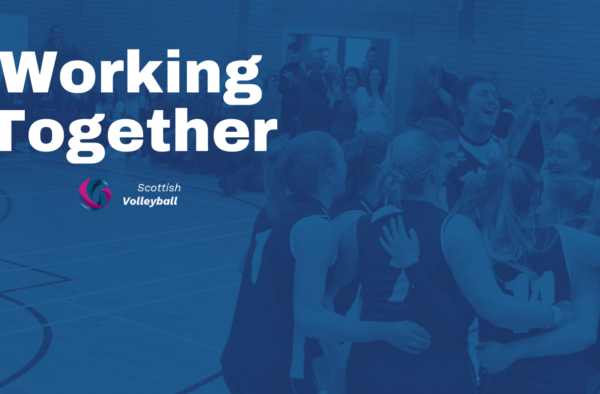 Dear clubs, members, officials, coaches, and volunteers, This Pandemic is affecting each one of us in ways none of us could have imagined.…