Saturday 30th July saw the Riverside Festival take place in Glasgow at the Riverside Museum. The day could not have started any better as there was perfect sunshine from the first ball served to the last point won.

The day began with the women’s tournament.

Troon VC players Elaine Krawczyk and Linsey Bunten took to the court to compete against St Andrews Beach Volleyball clubs Shelly Paterson and Cathy Smy from Aberdeen.  The match was very tight throughout and could have went anyway but Shelly’s skill on the sand and Cathy’s domination at the net gave a big advantage over Krawczyk/Bunten who had only competed in 1 tournament this season. The troon pair lost 2 sets to 0 (22-20, 21-16).

The second match brought a new pairing of Gillian Lyall and Alecks Toloczko together to compete against Bunten/Krawczyk. Lyall started off very strong from the start and showed why she is still at the top of the game with her complete array of tactics and shot making. Ably supported by Toloczko, this new pairing powered to the first set.  Bunten/Krawczyk knew they had to fight if they wanted to still win the title and came out firing in the second set with some excellent defence and serving tactics allowing them to set up the set. The pair dominated this set from the beginning and pushed on to the end of the set. The 3rd set was a complete lottery but Lyall/Toloczko started tentatively but an excellent run of serves from Toloczko put the pair in the driving seat. The team never looked back and managed to close the set and the match out 2 sets to 1 (21-16, 14-21, 15-9).

The 3rd match and final match of the Women’s tournament ended up being a winner takes all. Number 1 seeds Paterson/Smy took on Lyall/Toloczko. This match started strongly for both sides but the experience of Paterson and the physical presence of Smy didnt let the opposition into the match. The first set was competitive but Lyall/Toloczko couldnt string enough points together to get back into the match allowing their opponents to take the first set. Lyall/Toloczko regrouped and tried to get themselves fired up and find a solution to stopping the dominant opposition. It was all a bit too much and the experience of Lyall couldnt find a way to make a dent in the offence of the opposition.  Paterson/Smy dominated this match from the beginning and winning this match 2 sets to 0 (21-14, 21-15).

Paterson/Smy took the title of Riverside Beach Volleyball Masters for 2011. A well deserved accolade to the pairing.

The men’s event started at 2pm with the Jets VC Polish Pairing Mosinski/Sobieracki taking on Glasgow Mets Krawczyk/McLeod. The talent of Mosinski on the beach was to be applauded with some excellent attacks ably supported by the stability of Sobieracki.  Krawczyk/Mcleod have only competed in the Troon tournament this season and their lack of experience on the sand
showed at times. Because both of them are very talented players, they managed to hang in there with the Polish pairing who have played every event on the Scottish Beach Tour this season. The Polish pairing showed practice does help and managed to win this match 2 sets to 0 (21-16, 21-19).

The 2nd match brought Scottish Beach President Colin Paterson to the court with his partner from Colorado James Jensen.  Fresh off from winning the King of the Beach the previous week, Colin brought his winning mentality to the match Vs Mosinski/Sobieracki. This was a real nailbiter of a match and the lead changed so many times.  Some big blocking by Jensen followed by some excellent tactics by Paterson countered the power showed by Mosinski/Sobieracki.  Mosinski/Sobieracki took the first set. The St Andrews pair came back the second set to take this to a decider.The 3rd set started very fast and Paterson/Jensen took a commanding lead. This was something they were not going to lose. They closed out the 3rd set and won the match 2 sets to 1 (17-21, 21-16, 15-9).

The last match of the day was between Paterson/Jensen and Krawczyk/McLeod. The experience of Paterson showed throughout this match and his array of shot on the beach had Krawczyk/McLeod guessing alot and not able to read Colin. Jensen showed his dominance at the net which allowed Paterson the freedom to score at will. The first set was close but there was nothing Krawczyk/McLeod could do to stop the St Andrews pairing taking the first set. The second set was a mere formality for Paterson/Jensen. They took control and used their tactics very well to nulify the threat from the Glasgow Mets pair. Paterson showed off his continued tactics and Jensen showed his power at the net. This allowed to pair to take the second set and the match 2-0 (21-17, 21-8).

The title of Riverside Beach Masters was theirs and it was also fitting this team won as it is their last event together with Jensen leaving St Andrews to go home to the US.

The Riverside Beach Masters was a great success and it couldnt have been so great without the help of so many of Scottish Volleyballs talented officials, Colin McGinley for his expert commentary on the mic, the SVA Staff and most notably  Colin and Shelly Paterson for bringing this tournament to the unique venue at the Riverside Museum.

Shelly Paterson also managed to find time to speak with BBC Scotland.  The interview can be viewed here.

Here is looking forward to the final events on the Beach Tour. Lets hope they can be as succesful as the Riverside Masters. 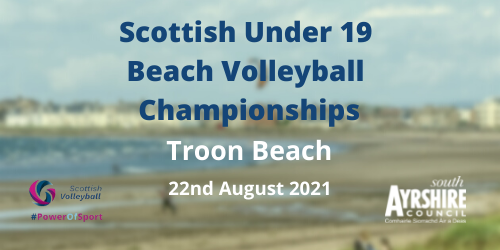