The journey continued into day 2 of the competition where the

Scotland squads faced 7 matches across the course of the day.  Any nerves from day 1 had settled and it was ‘game on’ for all the players.  The day brought some spectacular performances from the young Scottish athletes, particularly in their respective East v West matches where both the boys and girls battled it out in tie breaks.  As noted below, today it was the turn of the team
captains to comment on their day.

“In the morning, my team were really up for the day and on a high which carried into our first game against England North.  This helped us to play better as a team and develop better volleyball throughout the game. As our afternoon match approached against England South, we were looking forward to it after our exciting North game.  However, mainly due to service errors, we fell apart on court.  After our match, we received an inspirational talk from Nathan French which helped us go out fighting against the Scotland West girls where we took the first set and put up a good fight in the second set, but were narrowly defeated resulting in a tiebreak.  With the third set underway, it was stressful as we went point for point, and despite our best efforts and enthusiasm on court, we narrowly missed out on the win.  Our overall experience of the day has bonded the team further and made us understand the concept of volleyball further. I just wish I was able to be on court to help the girls but my ankle injury prevented that” Gemma Ramsay, Captain, Scotland East Girls

“We had a great game against Scotland West with an excellent all round performance where every player contributed on court.  Then against Wales, we received a well-earned win with a brilliant start and end to the game with a slightly sticky patch between!  Despite winning, my team was a bit down after the Wales game, because in a way it was harder to win than the West game where we had made the best of every opportunity.  However, it was a brilliant deal all round that we won both of our matches today” Matthew Agius, Captain, Scotland East Boys

‘UK School Games has been amazing this year with a great performance from all the teams!  Our Scotland West team has bonded well together into a squad.  It has been an awesome experience and the UK School Games should definitely keep going!  It is interesting to be able to see other sports and find out about them.  Tonight we had an excellent match against Scotland East which we won thankfully, but both teams played extremely well during the games.  I’m very grateful for this wonderful experience and would recommend it to others following in all sports” Katie Barbour, Captain, Scotland West Girls

“Today as a whole showed true character from our team.  With a tough game in the morning against a very sound Scotland East team was not the way that our team was going to head out the tournament. The boys bounced back and showed true fighting character against a talented England Central side to keep the fight going for our tournament.  The crowd of supporters over the two days was immense and I am honored and very proud to have played and let such a talented group of players.  I would also like to thank our incredible coaches who believed in us every minute….their encouragement and drive was true to our strong performances” Grant Gwynne, Captain, Scotland West Boys 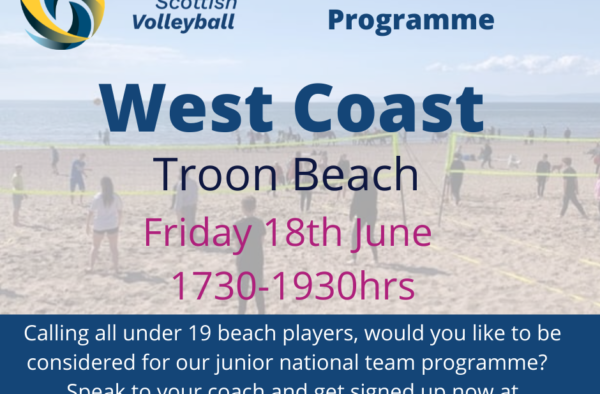 The CEV English Masters Beach Volleyball rolled into Blackpool today, which will be closely followed by the and FIVB…