Scottish Volleyball is busy preparing for 2012, a year which will feature our most adventurous calendar of National Team events so far! We want to celebrate all that is good in our sport so that we can be at the heart of the 2012 Olympics in our very own way!

For the first time ever Scotland has entered all four of our National Teams into the 2011-13 Small Countries Division Championships with our Beach Commission getting ready for some potential “breaking news” of a new pilot SCD competition for our most talented beach players in September 2012.

The junior girls spike start the two year campaign, with a qualification round in Malta in January 2012. This is followed by both our senior men and senior women’s teams playing qualification rounds at the beginning of June 2012, in Luxembourg and Malta respectively. The junior boys have an even more exciting championship to savour. Theirs is a straight 6 team final that will take place in Scotland 2nd – 8th April 2012. A full announcement of venue and programme information will follow in the weeks to come!

This year’s Christmas Internationals are being merged with the December 2012 events programme. In partnership with Glasgow City, and the opening of the brand new National Indoor Sports Arena, we will pull out all the stops to host a wonderful exhibition of Scottish Volleyball talent.

2012 promises to be the year of ‘You must be There’ events …………who mentioned the Olympics??

Scottish Volleyball is also still in the process of trying to secure an invitational match featuring the GB men or women’s teams. The match(es) will hopefully be staged at the very well known KelvinHall International Sports Arena some time in June/July 2012. The GB sides’ schedules are much dependant on their preparation and build up to the ‘Big One’ itself, but we are hopeful!

And finally……….”What of the UKSG’s 2012?” The future for the UKSG is still under wraps, so keep watching our website to know when an announcement will be made on what that future holds for this fantastic programme.

The year 2012 is shaping up to be full of hope, optimism and purpose for Scottish Volleyball. All the staff at the SVA Office, the Board and the Commissions wish all those involved a fantastic year, full of opportunities to be involved and excel! 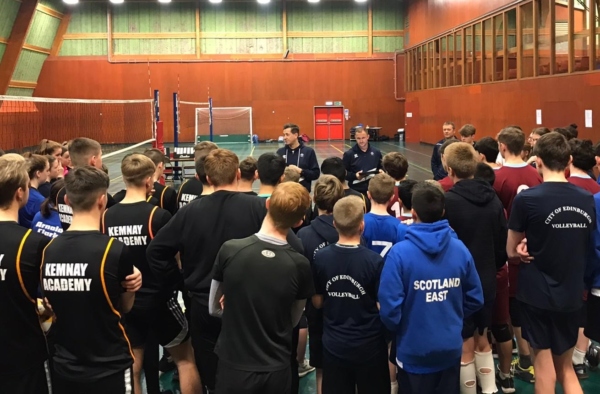 It was business as usual in the Lynch Sports Centre in Dundee for the S4/5/6 Festival on Thursday. The…
General 29th January 2013

Session 2 Fast Track Session 1 has come and gone, filled with effort and industry by both players and…