Thistles get Spiky in Novotel Triumph

Scotland’s senior men celebrated a famous victory by claiming the Novotel Cup for the first time after a sensational tournament in Luxembourg.

The Thistles had already confirmed their best-ever finish in the 12 year old event with two wins from three matches, but a victory over the hosts by Denmark propelled the Scots into first place on sets difference.

Scotland coach Simon Loftus travelled with a mixture of experienced and younger players. A selection decision to take setters Gavin Watt and Fraser Brown really paid off with both players having a fabulous tournament. Adding to an already complicated travelling schedule, there was also a last minute change to the squad, with the experienced and much valued Stuart Edgar, replacing the injured Mark Lawson.

Scotland’s first opposition came in the shape of Denmark.  Although the Danes rank several places above Scotland in the CEV rankings, they were confident enough to send an Under-20 team to the event, and started as pre-tournament favourites.  The tall Scandinavians looked the part in the pre-game warm-up, but were caught cold, as Scotland, with four 20 year olds in their party, dominated from the outset, and the match result of 3-0 in favour of Scotland was never really in doubt, as the Scotland block defence mopped up everything that was thrown at it.  Robin Miedzybrodski, nominated as captain for the first time, led the attack with 12 kills, while Ruari Isted had five blocks.

Luxembourg regard Scotland as one of their fiercest rivals in the SCD competition, and have favoured the match between the two countries as the show game of the tournament for the last three years. With 800 cheering Luxembourgoise in the hall and the whole country watching on TV, the hosts scrambled to a 2-0 lead, and looked to be extending their six year winning streak over the Scots. Coach Loftus, keen to make a change in the pattern of play, chose to introduce no fewer than four replacements for the fourth set, and the bench players seized on their opportunity to shine in the limelight, taking the next two sets to tie up the match.

The home crowd were going frantic by this point, as they saw their chance of capturing their own tournament for the first time evaporating. Scotland led 5-3 in the 5th, but two overpasses and two attack errors restored the initiative to hosts and to the huge relief of the fanatical locals, their team came home with the victory.  Scotland were able to take heart from a kill ratio of  42% and 18 kill blocks, Isted leading once again with 8.

Disappointed, but not downhearted, Scotland regrouped for their final match of the tournament, with the added spice of a clash with the Auld Enemy, England.

With five of the Scots plying their trade in the English Super-8 competition, it was a case of old friends well met, but Scotland stunned their rivals by storming through the opening exchanges, tearing holes in the England defence and controlling the serve with ease.  Over the course of the match, Scotland passed at 2.69, with libero Mike Penny in the stratospheric regions of 2.85 off 28 balls.

England, mustered by former GB players Andy Sinclair and Matty Howe fought as if their lives depended on it in the 3rd set. Scotland had a swing for the match, but England held firm and sneaked the set. This seemed to take the wind out of the Scottish sails, and England were able to tie up the match with a comfortable 4th set victory.

And so to the 5th set – ashes or glory for the Scots. With both teams trading spike after spike and from side out to side out, there was nothing to choose between the teams until the 5th set reached 11-10 in favour of Scotland. Then the Scottish players appeared to suddenly realise the gravity of the situation, and both teams suffered an attack of the nerves.  Four consecutive service errors kept the scoreboard ticking over before Seain Cook made the crucial breakthrough with a line drive to hand Scotland match ball. Another service error gave England a final chance, but a fine pass from Mike Penny was hit cross-court by Edgar. Both line-judges signalled a touch. The 1st official over-ruled! The Scotland players frantically pointed to the 2nd official who was signalling the touch and the referee changed his decision!

Cue hysteria on Scotland’s court, and utter disbelief on the part of England.  England setter Sam Bragg was shown a yellow card in the aftermath, but there was no change of mind from the 1st referee and Scotland celebrated a well deserved victory!

Contented with their best-ever showing, and with the Lux press building their team up for a tournament victory , the Scotland players could only watch as the ever-improving Danes showed their real class by serving and blocking the hosts to a 3-1 defeat. Scotland’s record of eight sets won and five lost bettered Luxembourg’s of seven sets for and five sets against, and it was Scotland who marched back into the gym to collect the winner’s trophy. England, the tournament winners for the women had already departed to catch an early flight home. Therefore there was one national anthem, and only one that was loudly played at the closing ceremony. The large home crowd rose as one when the floodlight filled the Saltire on the podium, and the strains for Flower of Scotland were heard all the way back to Edinburgh!

GB Men blown away by Australia

A day after the women’s side secured a maiden Great British volleyball win, the lights went out on their… 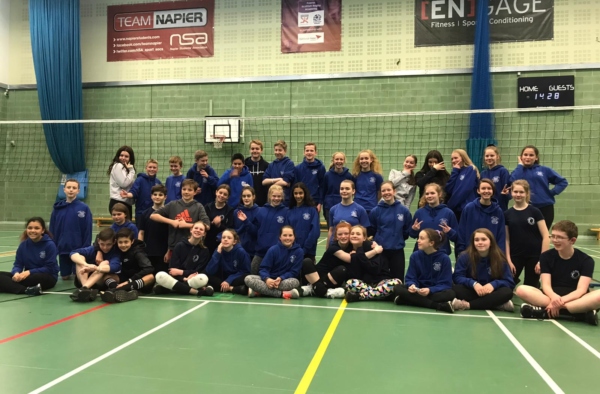 The S1/2/3 East Schools Festival took place once again at [EN]GAGE Sports Centre, Napier University. With an increase in the…