This is the first year that junior beach performance coaching sessions have been taken, and the aim in 2012 was to take a select squad to Malta for a CEV SCD beach volleyball camp. Training began at 3 venues in May, June and July – Portobello, St Andrews and Troon, and all 3 venues provided good quality beach volleyball coaching to juniors aged from 14-20 years old. This has been hugely successful and all the coaches have reported improvements in standards of play during the six weeks.

Unfortunately, at the last minute Malta cancelled the planned camp, leaving a lack of a target for the group. Due to my connections in Bournemouth, the opportunity arose to have a beach volleyball training camp there with the English and Dutch junior performance groups. This camp would finish with a 2-day tournament at Sandbanks in nearby Poole. We took this opportunity and, after some last minute phonecalls, a 5-day trip was hastily arranged.

After travelling down to the south coast on Tuesday, we were greeted on Wednesday morning with sunshine and a little wind as we headed down to one of the permanent courts at Sandbanks for our first session on the sand. We worked primarily on ball control in the wind and getting used to our new surroundings.

In the evening we had arranged to train with some local English players at the newly completed indoor beach facility at Oakmead College. This is a fantastic venue and as the weather turned nasty on Thursday, we made full use of this facility as we trained all day and evening with various sessions for boys and girls. By Thursday the Dutch junior performance squad and the TASS athletes had arrived and the juniors were put through their paces by Vince Joyce (coach to Mo Glover and Audrey Cooper in Atlanta 1996 Olympics and World Tour player), Andy Jones (full time beach and indoor coach), his son Lewie, the three Dutch coaches and myself. It was evident that the standard was high, and our six athletes trained hard and improved considerably over the first 2 days.

Friday morning was to be a light session and we headed down to one of the other permanent courts near Bournemouth Pier. As we walked to the court, we passed a huge stage and all sorts of trucks getting ready for the arrival of the Olympic Torch that evening. Our session was a light one, reinforcing what everyone had learned over the past 2 days.

After this, we showered and some of us went down to watch Lewie, one of the coaches, carry the Olympic Torch his 300 yards to glory.

Saturday morning and we all headed down to Sandbanks beach for the first day of competition. As expected, competition was fierce and the standard was high, however our players performed and fought hard.

As a beach coach all I could do was prepare them for the match as best I could beforehand, speaking to them about tactics and reinforcing what they had learned. During the matches I could only encourage as coaching is not allowed in beach volleyball during a match. Players have to communicate with each other, encourage each other and take much more responsibility, both on and off the court, than in the indoor game. After each match I tried to speak to each pair about what went well and what to work on for the next match.

This was a sharp learning curve for all the players and by the Sunday morning, having learned many lessons on Saturday, all the players came onto the beach with much more confidence and all played really well. It was fantastic to watch Laura and Katie win their first match together and their celebrations afterwards. It was equally good to watch the change in quality of play and increase in confidence by Ross and Chris and to listen to the positive comments from their opponents. Then to see Nicola and Lucy playing in a final on a packed centre court was a great way to finish.

Everyone did themselves proud, were fantastic ambassadors for Scottish Volleyball and it was a pleasure to accompany them on the first of hopefully many junior beach volleyball camps. 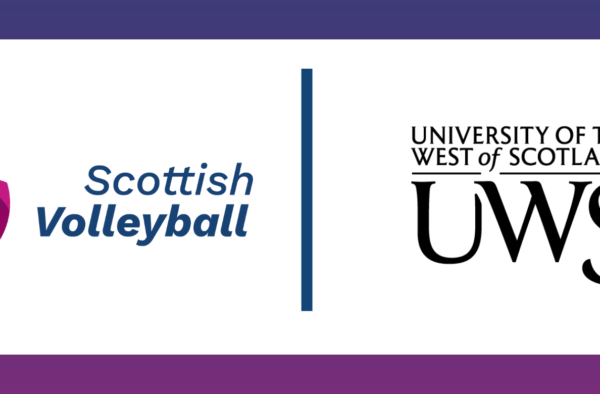 Scottish Volleyball is delighted to enter into an innovative partnership with the University of West of Scotland.  This partnership,…
General 10th April 2014