will be going all out to retain their 100% winning start. Billy Harris from Bellshill commented ‘Bellshill Cardinals take on Glasgow Mets this weekend
with both teams looking to build on their opening games success. It promises to be a keenly fought match if last year’s results with one win apiece are anything to go by’. Other matches in Division 2 West will see South Ayrshire III play in their first match of the season against club rivals South Ayrshire II and Su Ragazzi II open up the Su home matches against Kilmarnock II.

Women’s Division 2 also provides Edinburgh Jets II their first fixture of the season away to South Ayrshire II who will be looking to regroup after last week’s defeat to Kyle Team Ayrshire. Jets coach Seva Shneer talks about their ambitions for the season ‘We are rebuilding the team again this season, but we have genuine aims to get into the playoffs or even win the league outright’. The other match in Division 2 will be a hotly contested match between two of the division’s title contenders Dundee and Kyle Team Ayrshire.

Su Ragazzi will host Troon Team Ayrshire in the women’s 1st Division’s match of the day. Again both teams won last week and will be looking to pull a victory out of the bag to keep the pressure on early season favourites City of Edinburgh who have a home tie against Aberdonia. Edinburgh Jets will be trying to refocus with a victory over South Ayrshire and NUVOC will hope to take their form from last week into their big match against NLVC.

Finally, there are some exciting matches in the Men’s Division 1. South Ayrshire will be determined to make up for their loss against Kilmarnock from last week with a good showing away to Edinburgh Jets. The Edinburgh side took a set off one of the league favourites last week and will be looking to improve on a positive start. City of Glasgow Ragazzi host Kilmarnock, Glasgow Mets travel to Dundee and finally City of Edinburgh have a home tie against Bon Accord.

Good luck again to all teams 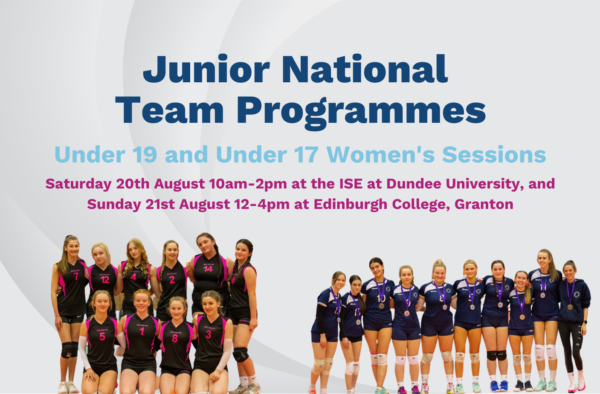 We are delighted to announce the continuation of the new women's junior national team programme, which will provide up-and-coming…
General 30th May 2017

The SVA are currently recruiting for Multiple Vacancies

Club and Participation Development Officer and a Part-time Administration Officer