A Week in the Life of the SWNTP: The Four Principles of Power

Luxembourg on the opening day of the CEV Small Countries Division Final 2013 the momentum within the Senior Women’s National Team Programme is building considerably.

Weekend practice has been augmented by the addition of midweek sessions that began on 1 May. The excellent facility at Calderhead High School, Shotts, has allowed us to develop a tangible ‘club’ feel within the group as the players work through the final phase of our preparations Every player is determined to demonstrate that they are worthy of one of the twelve possible slots in the squad that will board the flight to Malta on Thursday 27 June. This determination has created a performance level which just seems to increase session by session.

Match play is a key ingredient at this stage and the end of April saw the squad take on the Scottish Universities and Scotland Junior Women in a triangular tournament at The PEAK in Stirling. The players won both matches comfortably by playing with a performance edge that the opposition couldn’t handle. On paper the Senior Women should have won both games but in the past the reality has been a much more scrappy affair. This time the consistency in the performance level was evident for all to see.

As Coaches we talk a lot about power within the game. The ability to demonstrate power at the net, be it in hitting or blocking, can be the difference between winning and losing. But, just recently, we’ve introduced a different principle of power, one that has nothing to do with being able to hit the ball hard. In fact, we’ve introduced four Principles of Power.

These four principles are about a state of mind, attitude and behaviour.

If the individual pays attention to every possible detail then the ceiling of the performance level of the squad is raised.

This is self evident yet it is a really big challenge for every individual as they juggle all the various aspects of their lives while striving to achieve our goal.

For every action on the court there are six players involved in it.

No-one can afford to take time out on court at this level. No matter whether it is a pass, a set or a defensive dig every player on the court is involved in completing the action. If one player disengages then the ability of the group to play the subsequent phases of play is diminished.

The strength of the performance on court is determined by the belief of the squad off court.

If the 12 players selected to represent Scotland in Malta don’t believe in their ability to achieve our goal then our performance on court will reflect this.

The Squad has developed significantly over the past two years. There is a very definite understanding within the group that how we perform in practice will determine how well we perform on the court. It hasn’t been a relentlessly upward driving curve. It has been a bit of a roller-coaster journey at times but that has only helped to cement the players’ knowledge of what it takes to succeed on an international court.

The reality is that the 12 players who are eventually selected for Malta will have a great deal to thank those players who won’t make it. Without the work and effort put in by every player in the Squad it would not be possible to reach the performance level we need to be at in advance of heading off.

That’s the power of the Squad. 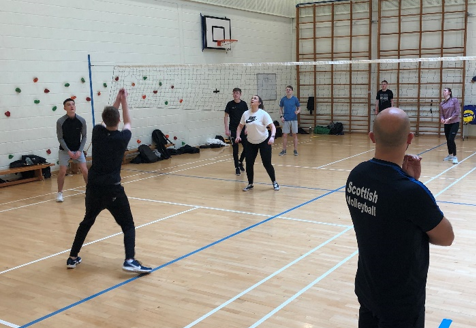 SVA Coach Education programme The Scottish Volleyball Association, in partnership with KA Leisure, is delighted to present the Level 1…
General 25th May 2017

The SVA are looking to recruit a Club & Participation Development Officer