The final stages of the men’s YS Programme

successful Power League for the Junior men’s programme.  Thanks to the support of Dundee, South Ayrshire and Edinburgh
Jets division I clubs the junior players have played 36 competitive sets as part of their build up to the 2014 SCD Euro Finals.  Also, thanks to the support from Mike McConville, Albert Jaster and Scott Mackenzie the 36 sets were officiated with a strict eye on the detail of the rules.

The final Power League fixture had the added bonus of featuring the senior men’s squad as interim coach Gordon Welsh took the opportunity to assess his players.  It was a terrific day.  The Scotland Blue juniors pushed the seniors right to the very edge.  The Scotland white juniors did the same.  The volleyball was high, was fast, was intense, was hugely enjoyable for the enthusiastic audience, and then it was done.

The YS Programme started in August 2012 with a group of 26 players.  Through several development camps and practice days this was whittled down to 17 players who competed in the Power League.  At the end of the final PL fixture on March 2nd this was reduced to a final 12.  This is the hardest part of coaching at National Team level – having to tell players who have been diligent and committed that they have not been selected.

All of the players who have been involved with the programme have made progress, all are better players for the experience, all are able to be more successful in their Club teams. A very big thank-you is deserved to all of the players who have given so generously of their time and their enthusiasm, and commiserations to those who were not selected.

The final selection for the Scottish Junior Men’s Team is listed below.  Congratulations to those who have been selected, and thank you to all of the many people who have helped make the programme so very enjoyable.  The SCD Finals for the junior men are on the weekend of the 11th – 13th April in Luxembourg. 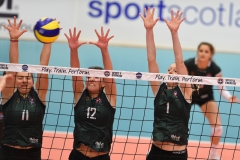