I am sure that will agree that the XX Commonwealth Games was a resounding success and the praise and positive feedback that was given to the Clydesiders and wider volunteers was most certainly merited.

Congratulations to all and we hope they can bring their experience and enthusiasm back to the benefit of our clubs.

the Malaysian women’s hockey team. I met them every day at the village and travelled with them to the hockey venue for training. I supported field of play and athlete services in ensuring my team’s needs were met during matches and training and I escorted them back to the village.

The Malaysian team were a great team to work with – they were friendly, polite and never complained! On the pitch, they worked hard for every single minute of the game. They could not be faulted for their effort. My experience of the Commonwealth Games was completely different to the Olympics. Firstly, I got to experience the Athletes Village which was incredible! The buzz around the village was great and it was great to be in such an international place! Secondly, unlike the Olympics, I got to get to know a team very well! My favourite part of this role was when my team, who many thought would finish 10th, played Canada for 7th place. They scored their first two goals of the tournament to draw 2-2, taking the match to a penalty shoot out and then winning 3-0 to take 7th place. I was cheering so loudly for them and the team were so elated!! This alone made the experience unforgettable for me and the team!

I didn’t think Glasgow 2014 would ever compare to London 2012 but it has – in a completely different way. I think Scotland have demonstrated their ability to host a multi sport, major event that has endeared them to the rest of the world and I am glad I was given the opportunity to be a part of it!

My main role was to be involved behind the scenes with PR and content production (photograph and video) from all around Glasgow 2014.

The main highlights for me from the games was working with the athletes. It was fabulous to see their reactions and personalities up close.

My role as a volunteer at the commonwealth games was very diverse and always interesting! It involved me looking after the coaches, officials and athletes at Hampden during the games. My favourite part of my job was escorting the winning athletes to their medal ceremonies.

I was lucky enough to get to meet and speak to lots of the athletes and this was definitely an experience I will never forget and thoroughly enjoyed!

My role in the commonwealth games was a medal procession team member! This involved dressing up in a kilt and carrying the medals out on the trays or escorting the VIPs and athletes to the podium.

The highlight of my games was meeting a fantastic team of people in my procession group and visiting fantastic venues to present in front very large crowds!

I was given the role at the shooting at Barry Buddon, Carnoustie. I was worried that it wouldn’t be the same as it wasn’t in Glasgow, however, the vibe around the venue was excellent from both the athletes and the workforce.

I was part of the spectator services team who helped everyone into and around the venue and getting them to their seats. I really enjoyed this role as I was always engaging with the spectators and I always had something to do.

Overall I had a fantastic experience at the commonwealth games and something I will never forget.

We supplied an “on demand service” for those with specific accreditation. Therefore they could jump in your car and request to go anywhere in Glasgow.

My one day training did not prepare me for the one way system! So some dignitaries did not need to do the open bus tour of Glasgow by the time i got them to a venue.  We were advised not to use sat nav as they prefered us  to use specific routes… made it intersting at times!

When the clients were in the car you didn’t know who they were… I had the UK sports minister, athletes (Scottish Shooter, Australian wrestlers), Chief Exec of the Games and probably lots of people who i didn’t recognise.

The shifts were hard. 10 hour shifts including 3 that finished at 2am and a full night shift.

There were 2000 drivers and 1000 cars for the games. An incredible experience and I met some fantastic volunteers and workforce personnel. I also now know Glasgow!

I spent 2 days at the athletes village then the rest of the time based in the athletes lounge at the SECC and Hydro providing an information and help desk for the athletes, coaches and teams.

Our role was to provide results, competition schedules, book training and answer any and every random question that could be asked (including helping one competitor phone home to tell his Mum he had won) and I now know more about boxing than I ever wanted to know.

Boxing and volleyball might be completely different on field of play, but the interplay and relationships between athletes, coaches, referees, international federation and organisers were very similar.

The athletes and teams were fantastic and the feedback we got was great. My last shift included two gold medals for Scotland and a full Hydro belting out Flower of Scotland. A great way to end.

My role involved me catering for athletes and their guests, helping them with their travel and ticketing as well as ensuring that they had a nice relaxing environment away from the buzz of the games when they needed it.

I worked as part of a great team who were very customer focused and I feel we managed to create a really good environment for the athletes and their friends and family.

It was a great experience and I am gutted that the games are now over.

As part of the Commonwealth Games, Su Ragazzi were asked to be part of the ‘live’ site at Glasgow Green, showcasing all that is good about sport and culture in Glasgow.

After negotiating our way to Glasgow Green, we set up a court in the sporting area of the site. No sooner was the court set up when our band of volunteers began to encourage the shy onlookers onto the court for a game. Before long, our court was full and queues building.

The day carried on this way right until the end. Masses of people with huge smiles came along, played some volleyball, found out a little more about the club and found out what a wonderful sport it is we play.

It turned out to be a huge success helped in no part by the glorious sunshine. There were a few red faces by the end!!

The club couldn’t have achieved this without all the players who turned out to help out, some even coming after work to give us a boost. Our thanks go to the players for all their help.

The clubs involvement didn’t stop there. Over at Pirie Park Primary School, our home training venue, another group of enthusiastic club members ran taster sessions for kids to come along and try some volleyball. Over 40 kids registered for the opportunity. Again, our thanks have to be given to the players for giving up their time.

If you also got involved in the games as a volunteer, please email us here and we’d be delighted to add you to this list. 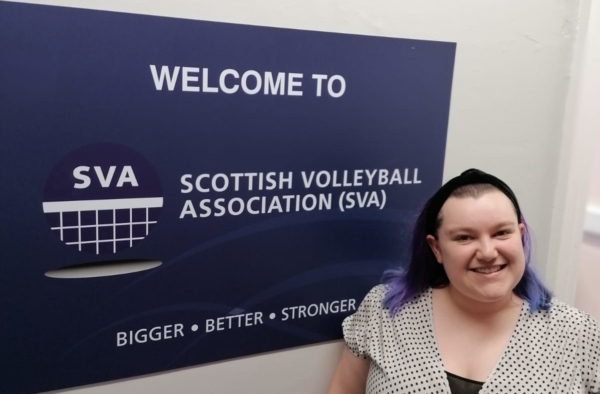 It is with great pleasure that I introduce the SVA’s new Administration Officer. Anna is 24, and has spent…