The final round of the 2014 Scottish Beach Volleyball Tour took place at Broughty Ferry, on the banks of the River Tay.

In the men’s tournament the old master of the Scottish beach scene, Colin Paterson, and sharp young blade Jamie McHardy were looking to gain revenge over the experienced and super fit Graham Riddle and Barry McGuigan, who beat them 2-1 on the Portobello sands a few weeks earlier.

But first they had to get past the strong Polish pairing of Konrad Krawczyk and Lenard Sobieracki who, combining speed and strength, are a litmus test for any would be Tour winner.

A strong performance saw them sweep aside the Poles 21-18, 21-12 to set up a rematch in the final. Unfortunately, they failed to build on their previous effort against the formidable McGuigan and Riddle, who put on an almost flawless display of volleyball.

In the women’s contest, the championship was already stitched up by Gillian Lyall. With the speedy Lilian Lieber – her only challenger for the title – unavailable, she only had to turn up to secure the trophy.

The seasoned competitor was not content with just showing up, of course, and with her regular beach partner Agata Zaremba, secured yet another Tour event win.

As everyone knows, Dundee is Scotland’s sunniest city, and only a brief shower marred an otherwise bright and sunny day. Aside from the sport, the highlight was a pair of the famous Tay dolphins putting on a display for the delighted volleyballers.

Thanks to all those who turned up early to help set up courts – Robbie Binnie, Callum Moir, Konrad Krawczyk and Petr Kolomaznik – everyone who helped break down at the end of the day, Davey McEwan, and the SVA staff.

Special thanks, as always, to Colin Paterson, who makes it all happen. 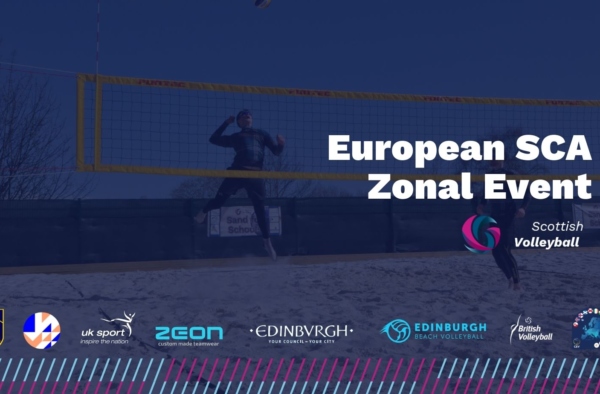 Scottish Volleyball is delighted to announce that we are hosting a CEV SCA beach event in Edinburgh, from the…
General 30th August 2010

Troon serves up another scorcher