After a smooth transit from Scotland down to Manchester on Thursday and the opening ceremony on the evening, Friday was the first day of competition.

What a start to the tournament Scotland had, with a massive contingent of travelling fans, parents, friends and families the atmosphere from the first ball was outstanding.

With many great performances; individually and collectively it would perhaps be unfair to focus on one team or certain games, however, the games involving England and Scotland produced some of the best volleyball and competition in recent years at the games.

With the east boys and girls opening the day well against English opposition with 22 different players featuring it was great to see the teams push the favourites so close.

But it was Scotland west girls who pulled off one of the greatest performances in the history of the school games. There was not an inch given from both teams in the first set and it was a great spectacle but Scotland showed great character and found the points they needed to win the set.

However, the team suffered a slump in the 2nd set going into the time-out 8-1 down before quickly finding themselves 20-10 down and you could have forgiven them for starting to think about the third set. But a tactical switch along with the constant encouragement and guidance from Head Coach Jess Reid saw the team fight back but still found themselves facing four set points at 20-24…. step-up Rachel Morrison, Ace… And again. With each serve the noise in the hall became deafening, 24-24, a long rally ensues finished off by Corrie Gwynne… Match point… Rachel Morrison ACE!! Scotland West girls 2-0 England Juniors.

against the England Juniors themselves, taking the first set. What a spectacle of volleyball it was, as we entered into the tie-break with the scores at 12-12. The Scottish crowd outnumbering all other nations pushed the team to two match points but the England Juniors side managed take the set 19-17. It was a great performance from our boys and hopefully they can take that performance into the rest of the games. If they do they’ll certainly have a successful tournament.

The last game of the day was an other Scotland-England battle with East boys taking on the England cadets. The team may have been feeling tried but they managed to dig deep and captain Rhys Arthur ‘ran the show’ well as they took the first set. However, it was the second set where the young boys really came of age as they played with confidence and scored freely from all areas of the court to take the set and match 25-13. 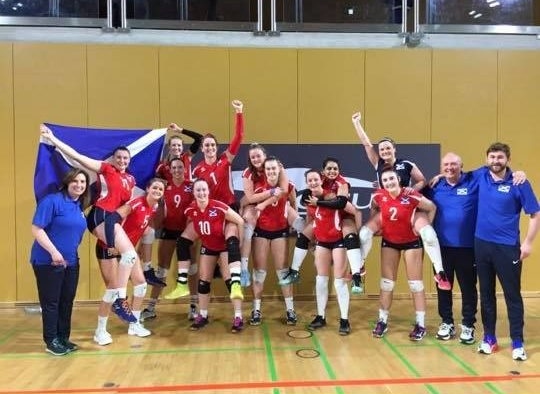