The COCO5 Finals Weekend with 10 Finals on display at the University of Edinburgh Sport & Exercise was hosted in a spectacular and professional fashion. It truly was a magnificent event, with a record-breaking attendance. A celebration of Scottish Volleyball and its members.

The Scottish Student International Challenge kicked off with a double header between the Scottish Students and Scotland under 23’s for Men and Women. Scotland U23 Women won the first two sets comfortably 25-13, 25-17, nevertheless the Scottish Student Women managed to recruit and win the 3rd set in a dramatic manner 27-25. The next set saw the U23 women reaching a level of performance enough to secure them the victory 25-20.

For the men’s International Student Challenge, Scottish Student Men dominated 3 v 0 Scotland U23 Men with 3-0 (16, 22, 22). The Student side actually had more Senior & U20 Caps in their ranks than the U23s and this experience showed on the court. It was great, however, to see so many talented young Scottish players take to the court.

Saturday saw the introduction of the Under 16 Scottish Cup, allowing the under 16s the opportunity to compete first hand on the Scottish Volleyball show court before moving onto selection for the Sainsbury’s School Games. City of Edinburgh were involved in both Finals with the Men taking on Perth & Kinross and the ladies tackling Marr College for the chance to win the opening Cup Final.
It was encouraging to see Perth & Kinross make their first national final with the support of their coaches Dave Munro and new coach Jamie Booth.

City of Edinburgh, despite the brave efforts of the Perth and Kinross on the first set, were stronger as a team, scoring important points from the middle. The sets finished 25-19, 25-17 for City of Edinburgh with one of their promising players Harris Ritchie being announced MVP at the U16 Junior Super Cup Final.

Marr College under the leadership of the new coach of the year for a female team Jess Reid achieved a great result and a flawless second set performance. City of Edinburgh lost the first set 25-18 and the second set tried revealed the power of Marr College which won with 25-6 and the final with 2-0 set. MVP of the game was given to Hannah Paisley from Marr College.

Saturday afternoon saw the Plate Finals being contested between NUVOC II & Su Ragazzi II in the Men and Su Ragazzi II & Caledonia West in the Women.

For the men competition the first set was very exciting, with NUVOC 2nd team edging the set, with 30-28 with Cameron Hardman having a good game. The next three sets went more according to the Su Ragazzi team, winning them convincingly with 25-16, 25-10, 25-13.

Su Ragazzi II women wanted to retain their title against a side in which most of the players competed in the recent SCD European Championships at the same venue. Jess Reid’s young and talented team managed to win after a very good game of volleyball with 3-1 sets. Final Score Su Ragazzi II 1 v 3 Caledonia West (19-25, 25-22, 23-25, 17-25).

On Sunday the Under 18 Scottish Cup Finals saw East vs West battles. City of Edinburgh Men took on South Ayrshire and after a magnificent game secured victory with 2 sets to 1 (25-22, 21-25, 15-8). Mitchell Brown was voted MVP having scored 20 points.

City of Edinburgh Women vs Marr College saw Marr College again dominating a game with lots of good defending with  2 v 0  (19, 18). MVP of the game was given to the setter of Marr College Laura Miliken who maximised her teammate’s chances to score with her sets.

In the men’s senior final, City of Edinburgh took the first set 25-22, both teams playing with a lot of passion and a lot of power but with City proving to be the more efficient side at important points. On the second set Edinburgh side dominated with 25-18 and when everyone thought the game was over South Ayrshire found the inner strength to come back and win the set 25-22 giving a new interest to the final. Edinburgh regained their focus and momentum with Niall Collin scoring many points as an opposite and answered the challenge winning the set with 25-14 and the cup with 3-1 sets.

The final match of the weekend put rivals City of Edinburgh Women against Su Ragazzi on one of the ‘most titanic matches ever seen in Scotland’ as quoted by one of the coaches. There were some outstanding individual performances on this high level volleyball game. Su Ragazzi Women attempted to win the Scottish Cup for the first time in their history but that was not meant to be. City of Edinburgh won the first set 25-23 and the second with 25-22. Su Ragazzi came back with a lot of courage and the 3rd set with a great performance 25-17 however they were unable to continue with the same intensity on the 4th set which went to City of Edinburgh.

At the awards ceremony two players of Su Ragazzi Lynne Beattie and Alasdair Galloway won the Final Whistle player of the year awards while the coach of the year awards were won by Ally Jack of City of Edinburgh and Jess Reid of Marr College/Caledonia West. 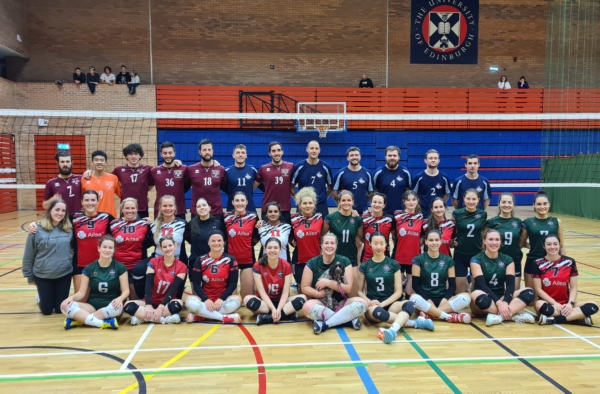 This weekend saw the conclusion of the Bill Stobie Interclub Challenge, a new preseason tournament ran by Bill Stobie,…