On Tuesday 7th June South Ayrshire Active schools held their annual volunteer awards evening at Ayr town hall. Vince Krawczyk had been nominated for the outstanding contribution award for his volunteering in the local authority. Vince over the years has volunteer countless hours to the sport of volleyball and has delivered sessions in all of the 42 primary schools and supported the work of the Secondary school PE departments. This year has been no different as Vince himself said he has dedicated almost 40 hours a week to volleyball. These hours have been made up of active schools sessions, junior club coaching, senior club coaching and National team programs.

In light of his dedication to the South Ayrshire Active schools program he was one of three Nominees who were being recognised for their contribution to the Local Authority program. As the evening wore on Vince was convinced that he had not won the award, this was due to the winners of the other categories had had a video clip made about their work. As Vince himself had not had this he was convinced that he had not been successful. However I had the pleasure of recording a small video on his behalf and this had been enough to ensure that Vince had a massive surprise in store.

When his name was called there was a genuine look of surprise on his face followed. He was joined on the evening by his brother Tom and his son and Scotland setter Alan. They were delighted to be there to celebrate Vince collecting the outstanding contribution to Active Schools award. I was delighted to be there at the ceremony to share in the celebrations and to recognise and support one of Scottish Volleyballs top coaches. With the school year coming to an end Vince said he was looking forward to the summer break.

Q What honour do Vince Krawczyk and Barry McGuigan share……? A. They are the SVA’s current… 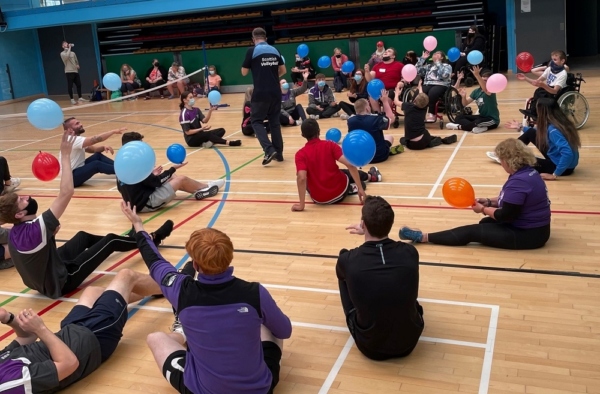 On Friday morning myself and Coaching & Clubs Officer, Andy Fleming, set off to Aberdeen for the Scottish Disability…