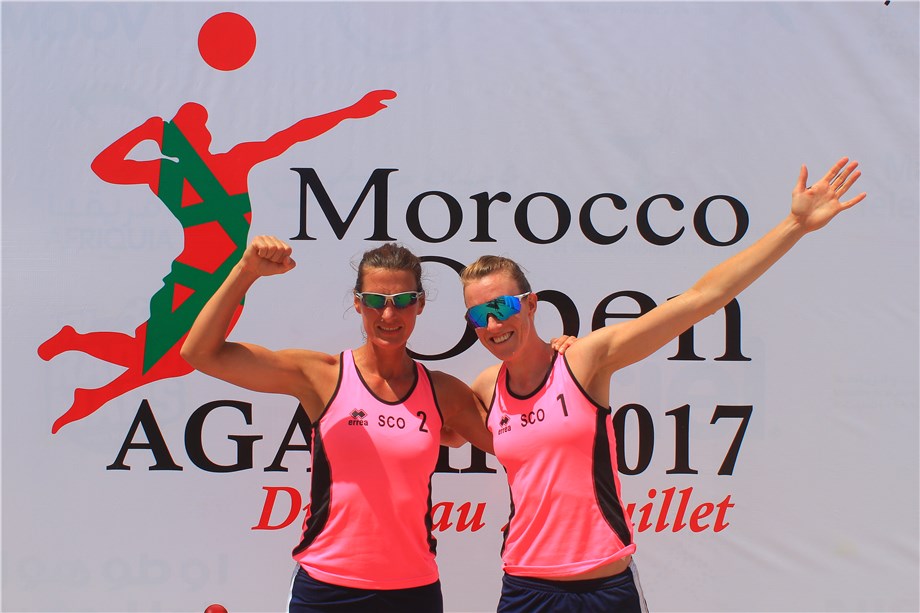 Lynne Beattie and Melissa Coutts have been preparing for beach volleyball’s debut as a Commonwealth Games sport in unique circumstances, in a barn not far from Edinburgh.
The pair qualified for Gold Coast 2018 by virtue of winning a wild card place in December 2017, and by then their efforts to qualify for the tournament that will take place in a 4,000-capacity arena on Coolangatta Beach had already been picked up by local newspapers, radio and television.
Taking note was a local farmer just outside the Scottish capital, who offered the pair the use of one of his barns as an indoor training facility. It meant that they didn’t have to venture out into the frigid Scottish air as often as they might have had to during the winter months, and it has since captured the imagination of the Scottish beach volleyball community.
“The barn came about following an appearance on television and promotional work on social media and a radio interview,” said FIVB Technical and Coaching Commission member Audrey Cooper. “A farmer said that he had a barn and spare space. Lynne and Mel then spoke with the farmer. The farmer cleared the area and they bought the sand and they put the sand in the barn.

“I was there at Christmas, because I’m helping coach them, and it’s a really good facility. It’s cold, but it’s great sand, they have a court – it’s a special area. There’s no rain, no wind, no icy sand. So now they have a training facility. Not getting enough sand time, without having to travel to Europe, was the big concern. So now we have our court in Scotland where we can train 24/7. We don’t have to look outside to check on the weather.”
Beattie and Coutts have quickly made their mark on the FIVB Beach Volleyball World Tour since they made their debut together at the Sydney 2-Star Tournament in March 2017. They finished in ninth place, and then featured in six more tournaments with a quarterfinal finish at the Agadir 1-Star Tournament their best result of the year.
The duo is one of two Scottish teams set to head to Australia, along with male pair Seain Cook and Robin Miedzybrodzki. They have been drawn in a pool where they will face Canada, Sri Lanka and Sierra Leone.
Beattie is well aware of what to expect from a multi-sport competition as she captained the Great Britain and Northern Ireland team at the London 2012 Olympic Games. Coutts made her World Tour debut in 1999 and has continued with both volleyball and beach volleyball ever since.
They train on Portobello Beach near Edinburgh and Cooper has been passing on her experience of playing in the first Olympic beach volleyball tournament at the Atlanta 1996 Olympic Games.
“In many ways, it’s déjà vu for me,” Cooper said. “I competed in 1996 at the Olympics and we had to do something very similar to find solutions because there wasn’t lots of funding. We played at all the World Tour events and finally qualified for the Olympics.
“It’s fantastic that Richard Callicott, the President of the Commonwealth

Volleyball Federations Beach Volleyball Steering Group, worked tirelessly with Volleyball Australia President Craig Carracher to get beach volleyball on to the Commonwealth Games programme. It’s brilliant for the world of volleyball to have another competition especially for some of the smaller nations to be given the opportunity to play international volleyball.
“It is also true for Scotland and England and Wales and Ireland, to have this as a possible opportunity to go to a major, multi-sport event that has a lot of media coverage.”
Beattie and Coutts began the year at the 4-Star Dela Beach Open in The Hague, and are on the entry list for the Fort Lauderdale 5-Star tournament that runs from February 27-March 4. They will then jet south of the equator for the Gold Coast 2018 Commonwealth Games.
In between training they are working hard to promote beach volleyball and volleyball in schools and sports clubs. The aim is to ensure that there will be a line of players ready to follow them, to keep the Scottish flag flying on the World Tour and at major tournaments, as well as making sure the barn continues to be used for beach volleyball players and not livestock.
“The girls have done an amazing job in terms of promoting the sport of beach volleyball,” Cooper said. “They both work in volleyball and they have also engaged with lots of children to take up the sport.
“Lynne particularly is working going into schools and setting up clubs. So not only are they trying to compete and prepare for the Commonwealth Games, they are also trying to grow the sport in Scotland as well.”
share: