determination for 16 teams vying to make it to their respective Cup Finals.

The joint Semi Finals day was brought into the SVA Events Calendar 2 years ago and has been a success each year giving the athletes a platform to display their hard work and determination to make the SVA showpiece Finals Weekend.

This year will see the Cup Final holders face tough opposition to get to the April 21st showdown in an attempt to retain their crowns from 2017.

In the Men’s Cup, City of Edinburgh will be vying to recapture the title they won in 2016 when they take on Su Ragazzi II, who have won the Scottish Plate for the past 3 years. Coaches Ally Jack and Thomas Dowens will be doing whatever they can to win the tactical battle between the sides.

Next up, South Ayrshire will take on Cup Holders City of Glasgow Ragazzi. Both teams are fighting it out for the SVL Premier title with the Glasgow side in a strong position to retain their title. South with a very good mix of youth and experience will be a very tough test for the Glasgow side.

The Women’s Scottish Cup will see a new face in the Scottish Cup Final when NUVOC take on the University of Edinburgh. Both teams have not had their best seasons but with a month to prepare for the Final, they will be working hard to ensure they are ready for their biggest test of the season.

The last Cup match of the day will see 2 old rivals go head to head in a bid to win the 2nd piece of silverware for the season. Su Ragazzi won the first trophy of the season at the John Syer Grand Prix in February with a commanding 3-1 victory. As we are now into the SVL Premier Split, the teams are neck and neck to win the league title but can City of Edinburgh take the match to claw back the Cup they won in 2016 over Su.

The Scottish Plate Semi Finals have now had the platform to perform for 2 years now and they are not disappointing.

The first match up between Nisbet Duffin’s Edinburgh Jets II and Jillian Barton’s Su Ragazzi II will be close, tough and a battle. Both teams have competed very well in Women’s League 1 this year and will use this as a stepping stone to try to give their team an end of season day out.

Current holders Troon Vets will take on University of Stirling in the second match of the day. With numerous Scottish Internationalists in their side, Troon Vets have years of experience under their belt which will be called upon to try and make quick work of their younger University counterparts, who are under the leadership of coach Ioannis Panayiotakis.

The Men’s Plate Semi Finals get underway with City of Edinburgh II, who are having a fantastic season in League One, taking on another University side in the form of University of Dundee. The uni guys are currently sitting 4th in the Scottish 1a and will be happy to have a chance to make the Plate Final.

The Final match in the Men’s Scottish Plate will pit Youth vs Experience, a lot

of it. NUVOC II full of youngsters, and some experience, will take on Mets Vets for a chance to compete in the final. Mets Vets have added from competing in the Scottish Open Volleyball Tournament to including the Plate Competition. It is great to see so many players coming back to play a sport they love.

This weekend will be fun, competitive and played in great spirits by all players while the fantastic officials will be doing their usual best to ensure the players have the opportunity to keep the ball flying.

Tickets for the Semi Finals can be purchased online here, or bought at the Ticket Desk for £2.50.

The order of play will be:

CHANGE OF BEACH FOR THIS SATURDAY 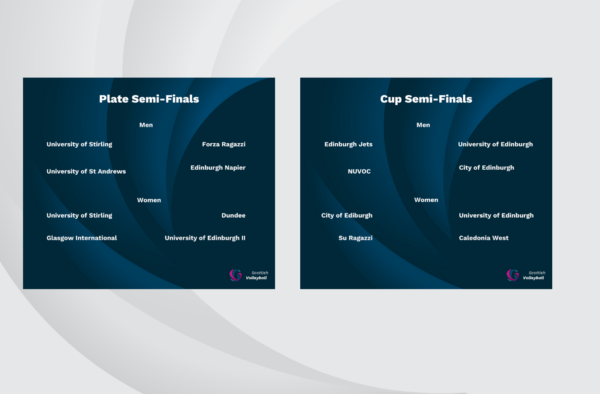 That time of the year is approaching very quickly! The Scottish Cup and Plate semi-finals draw is done and…