Scotland’s senior women’s national team are making their weary way home on the 31st March as this report is written from Bologna Airport following a very arduous but rewarding trip to Porto san Giorgio in South East Italy.

Arriving at 4am on a match day is not the ideal preparation for an international match that evening but the Scots women had to do that yet still managed to come out with a victory against Iceland their first opponents in the San Giorgio Easter tournament.

Scotland had arrived in Italy with half a dozen key players missing from their more recent internationals yet managed to defeat a youthful Icelandic side by 3 sets to 1. There was so much to be pleased with in this performance from the setting of Priya Gill, Nicole Ramage and Emma Waldie to the passing of captain McReady and Claire Ramage and the amazing defence of Katie Barbour. Carly Murray and Mhairi Agnew were intimidating blockers throughout the game as the Scots laid down a marker for the rest of the tournament.

Next day the Scottish Women blew away a decent Liechtenstein side in a 3 sets to 0 victory and Caitlin McEwan was able to show her value to the side at the net. There was a strong hitting performance too from Shona Fraser. Rachel Morrison, Sam Fowler and Raveen Gill all played their part in this comprehensive victory.

The Scots had now put themselves into a title deciding final match of the tournament against the excellent Italian club side Pagliare on the third and last day of this fabulous tournament held in a beautiful resort town.

Before that though in the morning they played a scrimmage game against host club Volleyball Angels. It was a great opportunity for the whole squad to be tested before what was to be the grand final.

Pagliare were outstanding in the first set with fierce serving and fast attacks and raced to a 25-14 win. It was more of the same in the second set but then young players Nicole Ramage, Rachel Morrison and Shona Fraser came to the fore and helped the team claw there way back into the set but a late surge from Pagliare saw the set go their way 25-18.

In what turned out to be the final set Scotland’s squads more experienced players rallied with great blocking from Agnew and Murray, smart hitting from McEwan, McReady and Clair Ramage, brave setting from Priya Gill and great defence and passing from Katie Barbour. As the set reached an exciting climax once again the skill and resolve of the Italians saw them win the set 25-21 and with it the match and the tournament.

It was a difficult but suitably challenging ending following such a great three days of volleyball from the Scots. Heads were held high though at the closing ceremony as our fine team celebrated their 2nd place finish.

There are so many people to thank. Our own players for their unswerving dedication to our sport. On the coaching/management side Gail Campbell was phenomenal as usual and it was great to have the wisdom of Tom Rooney around and Greg Murray did a very positive job assisting the coaching staff as well as ensuring that the matches were transmitted back home. Our competitors whether Italian,  LiechtensteinIan or Icelandic and their staff were a never ending source of good humour and comradeship which reflects so well on our sport.

The organisers of the tournament though – the splendid Fulvio Taffoni, his Volleyball Angels staff and the sports authorities and the mayor and the officers of Porto san Giorgio are such  generous hosts and run such a brilliant tournament that words are inadequate to describe what a fabulous opportunity they have given our athletes for the past two years.

By the way, this is such a beautiful part of the world that you should really make every effort to pay a visit.

On the team itself, they were brilliant ambassadors and great participants who did our country proud and will continue to do so. The next event for them is a massive match against England on the 19th of May in Newcastle to celebrate 50 years of that fixture.

Another great day on the sand with the juniors … 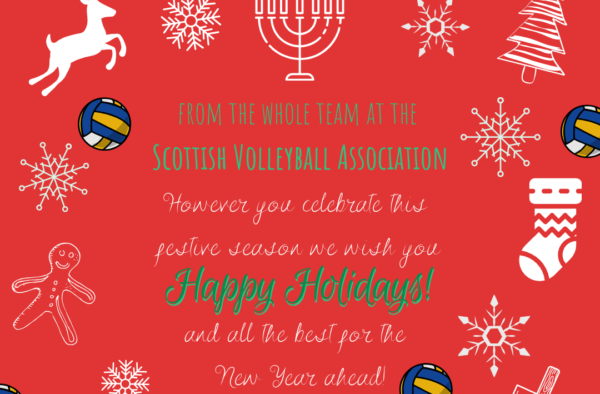 The SVA Offices will be closed from today, Friday 20th December, until Monday 6th January. From the whole team…