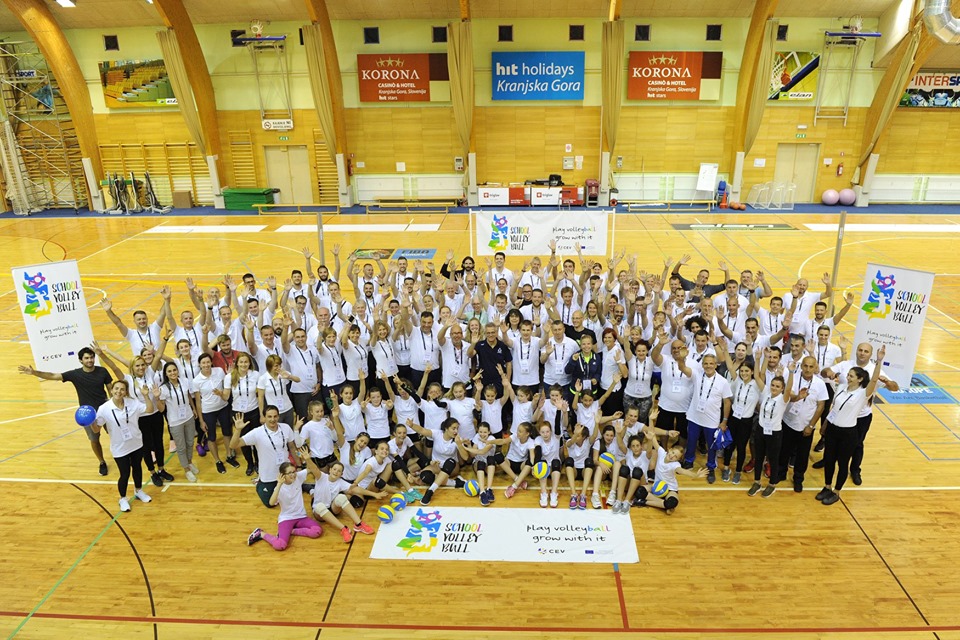 The meeting time of 4.30am for a 6.05 flight from Glasgow was a bit daunting for me from Dundee, Zoe Smith and Hanna Nommik from Edinburgh and Lisa Thomson from Troon. We made the first flight to Amsterdam and had less than an hour to dash through the airport for the next flight to Ljubljana. We arrived on schedule and walked into glorious sunshine and waited for others from several countries to assemble. We made the 90 minute bus journey up into the mountains to Kranjska Gora for the start of the first CEV Coaches Convention, with the emphasis on the schools volleyball.

After a good sleep, the Convention started early on Saturday morning with presentations from the four coaches who had agreed to show the assembled company, from more than 20 countries, how they introduce volleyball to their youngsters. There were four different versions, with different philosophies and reasons for delivering their programme within their volleyball context.

The rain was hammering down after lunch as we all ran into the magnificent local sports hall for the practical demonstrations to back up the coaches’ philosophies. The first session was from Kristof De Loose from Belgium, who had been in Scotland in March for the launch of the CEV Schools Project in Strathaven Academy in Ayrshire. He started with the 24 local schoolgirls using reaction balls. Lots of fun and laughter as they dived about trying to grab the wayward bouncing balls! He then introduced one, then two, then three balloons, with the girls working hard to keep them in the air. He added junior volleyballs as the girls strived to co-operate, moving and adjusting their bodies through a series of drills to promote ‘Fun, Movement, Learning’.
Remko Kenter from the Netherlands was next up and used small-sided games to start his workshop. He changed to moving into position to collect the ball and had the girls sliding across the floor to retrieve the ball. They progressed onto movement to pass and then an introduction to ‘Smashball’, going from 1v1 to 2v2.

The energetic session from Peter Morell from the Faroe Islands was next as he introduced fast feet, quick body shifts and the first mention of volleyball techniques. His session was a replica of a typical class lesson in a Faroe Islands school, with 32 children and limited space. Eight coaches joined in to make up the 32 and the hall temperature began to rise! It was a high energy, tough 45 minutes.The afternoon concluded with Marco Mencarelli showing how his Italian children, in his club, build up their skills. His emphasis was on hitting and showed some exciting and interesting practices for the girls to develop their attacking skills.  He then used the hitting as the focus for the small games that the group played.The tired schoolgirls received a huge round of applause from the assembled coaches and many of them took a balloon as a souvenir.

After a networking dinner on the Saturday night, it was a question and answer session for the panel of guest coaches. They were grilled with tough questions and had to be very clear and precise with their answers to persuade the coaches to endorse their ideas. Some interesting differences of opinion were evident as they battled to justify their work. The Convention closed at midday and the long journey home began. We said our goodbyes at Glasgow Airport at 10.30 on Sunday night.

“Meet me at the Net” – Troon Volleyball Club

Unfortunately my visit to Troon Volleyball Club on Saturday was cancelled and will be rescheduled later in the season.
General 3rd April 2016