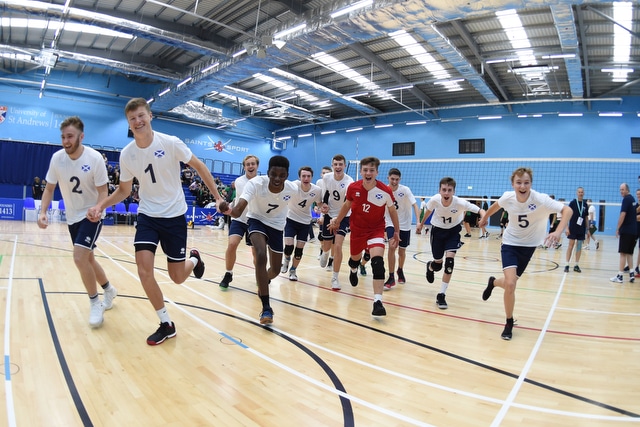 Over the past 2 months, almost 130 junior players from all across Scotland have been busy training and trialling for the second year of the Flying Scots programme. After many deliberations and a few last minute changes, the staff across all programmes have made their selections for both the Intra-Squads competition and the International competition in 2019.

The morning round of matches will each last an hour and feature a points scoring system similar to last year which rewards the first team to 8 points per set, teams that reach 21 points in a losing set and points for the set winner. The afternoon will go to a more traditional scoring system of a best of 3 set match between Blue and Navy & White and Red. There can only be one winner with the East desperate to retain the trophy they won last year.

Then on the Sunday, all the players will be heading down to the St Andrews West Sands to try their hand at some Beach Volleyball. The players will receive a Beach Volleyball masterclass to introduce them to a different discipline. They will then compete again in their regions but this time in a more relaxed, festival format.

For the other Flying Scots tournament, we are delighted to announce the addition of Ireland to this year’s competition in addition to our returning teams of Northern Ireland and North West England. This is increasing the number of teams competing in this year’s Flying Scots International Invitational competition to 5 teams per gender. The Flying Scots International Tournament 2019 will be at the University of St Andrews from Friday 30th August until Sunday 1st September.

Get Involved!
If you, like our amazing team of volunteers, are inspired by the Flying Scots Programme, and would like to lend your support to the team pioneering a positive future for volleyball in Scotland, then why not get in touch.

If you are a parent or carer, then we have a specific group of parents who fundraise money to spend on extras for the players such as t-shirts, an end of year celebration, or anything else they can think of. If this interests you then please join their Facebook group.

If you want to try your hand at volunteering at a major sporting event, then get in touch with the Flying Scots team for more information.

Row to the Faroes The Faroe Islands lie approximately 700km away.  We don’t really fancy rowing there, we are…
Events General School 21st May 2013

SOVT – Perth Open almost upon us

Only a few days till the 29th Scottish Open Volleyball Tournament…