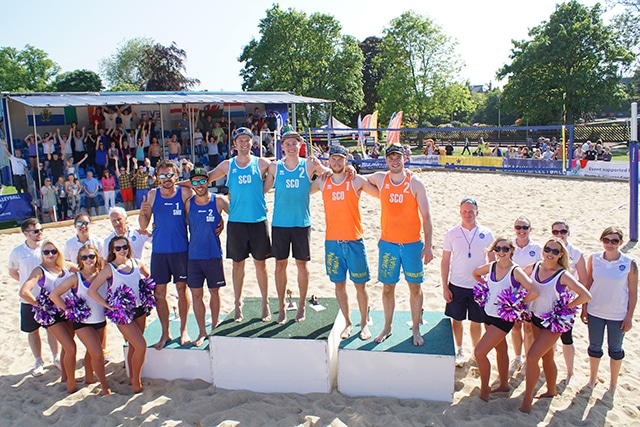 Beach Volleyball is a fast paced sport that’s easy to learn but hard to take your eyes off. Whether it’s the 120kph serves that the top players can pull out, or a sneaky tip from an up-and-coming junior, Beach Volleyball forces players to be at their physical peak whilst reading an incredibly tactical game.

As such, the Scottish Volleyball Association are proud to be bringing the Small Countries Association Beach Volleyball Finals 2019 to Perth thanks to a partnership with Perth and Kinross Council. Not only does this mean four days of international level beach volleyball for the people of Perth, but it also allows for the creation of a permanent inland Beach Volleyball Centre in Perth. The former bowling green at Darnhall Tennis Club is being replaced by 400 tonnes of sand in order to provide a fantastic facility for local and national athletes and members of the public alike.

The Small Countries Association brings together fifteen of the smallest Volleyball playing nations in Europe to create a more level playing field. The fifteen are made up of nations such as Scotland, Northern Ireland, Wales, Andorra, Luxemburg and even the Faroe Islands and Cyprus. As this event is in Scotland, there are three guaranteed places for Scottish pairs in both the Men’s and Women’s competition. Events such as the SCA Beach Finals are becoming increasingly important following the amazing announcement that Beach Volleyball will be a part of the Birmingham 2022 Commonwealth Games. It has also been agreed to have a wild card pair in both the Men’s and Women’s competition from leading European Federations, these pairs will be bringing all of their experience and skills to try and spring an upset the SCA Pairs.

Qualifying for the Main Draw spaces will take place on the Thursday afternoon, from 3pm onwards. This is a prime chance to spot some of the best up-and-coming Scottish Junior Beach Volleyball athletes before the Main Draw begins on the Friday morning. The top athletes from the pool phases will then move onto the Quarter Finals and eventually Semi Finals on the Saturday afternoon. These are certainly not to be missed with teams doing their everything to make Sunday’s Final. Finally, we’ll be hoping for one more day of sun for the Finals over lunchtime on the Sunday, as sadly we can guarantee the sand but not the sun.

The event will take place from Thursday 19th to Sunday 22nd September.

The Finals will take place on Sunday 22nd September from 1pm to 3pm.