Dundee Meet me at the Net

Saturday 19th September saw the start of the new Schelde National League season and also the start of my “Meet me at the Net” project.  After many months of preparing and planning the 1st visit was arranged with Dundee Volleyball Club and I made the journey North on Saturday morning with a degree of both enthusiasm and apprehension.  However as my first point of contact was with the well known figure of John Scrimgeour this apprehension was quickly dispersed.

Dundee is one of Scotland’s oldest volleyball clubs and have had a very long history of success.  This year the club are running with 1 men’s team and 1 women’s both in the 2nd division.  Given that they had 3 National League teams last season, one of which was in the men’s 1st division, the initial impression I could have had was one of a club that was struggling to continue…FAR FROM IT!!  The club may have lost their men’s 1st division team but behind the scenes there is a major transition and development period going on.

My conversation with Leigh Watson, the Club Administrator, was nothing but positive.  Dundee Volleyball Club has made a fantastic start to re-energising the Club by establishing strategic links with two primary sources for player recruitment.  The men’s team have recruited a number of players from Dundee University (Freddie Fairbairn, Iain Hoy and Fraser Smith), and Michael Coward and Colin McEvoy have taken the step up from the Arbroath District League.  All are thriving on the competition in the National League.  Michael  Coward in particular produced an outstanding performance in his first National League game on Saturday, and at the tender age of 18 is a great prospect for the future and has the ability to slot easily into the young senior men’s programme.

Similarly in the women’s programme links have been established with District League clubs and also Carnoustie High School.  One young star from the UK Schools Games Scotland East team Nicola McKenzie has taken the bold step into National League Volleyball and is another one to watch out for in the future.  The player recruitment policy and partnership links with other institutions being put in place by the Club work, and will unquestionably ensure the continued presence of the Dundee VC in the Scottish Volleyball scene.  The wealth of knowledge and experience the Club’s Coaching Staff have will help ensure the success of their new recruits.

My feature match saw Dundee play Bellshill in the men’s 2nd division.  Dundee took and early 7-3 lead and a highly competitive match followed.  The highlight being some great defence from both teams with John Scrimgeour and Billy Harris showing the youngsters how it should be done.  Bellshill won the first two sets 25-16 25-22 and taking an early 13-8 lead in the 3rd looked set to close out at a comfortable 3 nil win.  However Dundee fought back with some excellent serving from Freddie Fairbairn and some powerful hitting from Neil Collin and Michael Coward and turned the set around to win 27-25..GAME ON. The start of the 4th set was nip and tuck at 6-6 but Bellshill took the initiative and with some probing serves and some tactical hitting went on to win 25-20.  The 5th set was another exciting encounter with Bellshill finally coming out on top 17-15 to record a 4 sets to 1 victory.

I would like to thank Dundee Volleyball club for making me feel very welcome.  It was great to meet both teams after the match while sampling Dundee’s famous post match hospitality.  The Committee of the club will now be working on preparing a draft development plan and I look forward to working closely with them over the coming weeks, months and years.

If you would like any information on Dundee Volleyball Club please contact Leigh Watson  or Sandra Grubb. 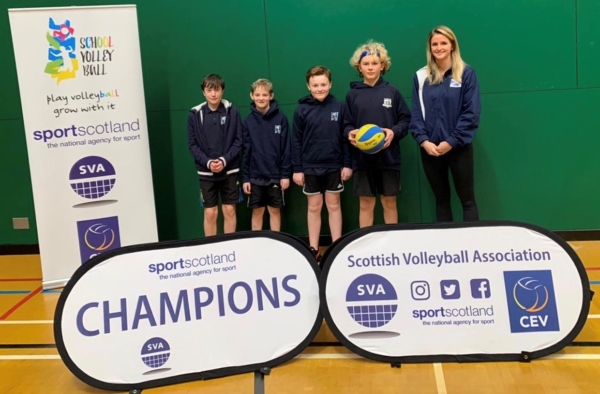 The School volleyball festival season served-off with the 1st senior competition at the Kelvin Hall in Glasgow.