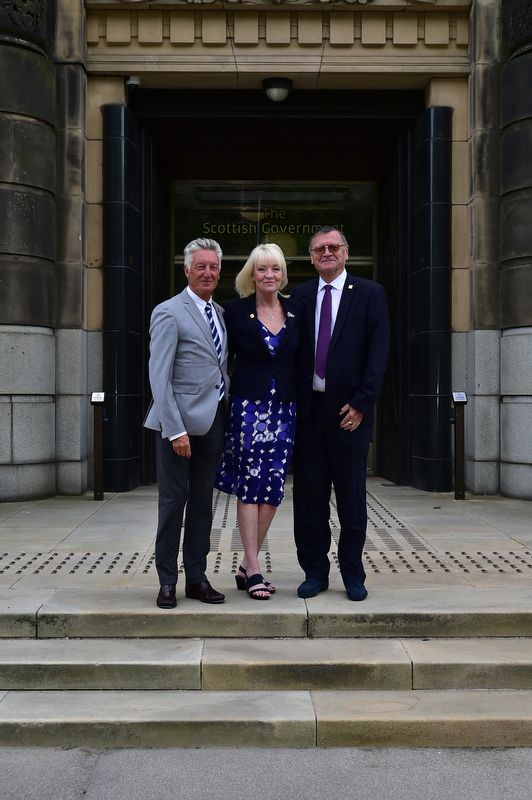 Mr Boričić, CEV President and Mr Arena CEV 1st Vice-President met today, 9th August 2022 with Margaret Ann Fleming MBE, Chief Executive Officer of Scottish Volleyball and CEV Vice- President. This initial meeting included discussions on strategic planning for the future, partnership work between the CEV and Scottish Volleyball Federation and how CEV can support the Scottish Federation with the planning and delivery of the 2024 CEV U20 Women’s European finals, being held in Ireland and Scotland. Further to this, all three discussed Scottish Volleyball’s successful FIVB project platform, and the possibility of further support to this project and the future coaching requirements of the Scottish Federation.

This was then followed by a meeting with the University of Edinburgh and Jim Aitken, Director and Head of Sport Development, where they discussed the ongoing successful partnership between the University and Scottish Volleyball. In addition, the development of young people in sport and the pathways to performance were discussed, specifically the inclusion of female participation and the new indoor facility, which shall include space for Volleyball and the opening of this building in 2026.

Finally, Mr Boričić and Mr Arena met with Maree Todd MSP, Minister for Public Health, Women’s Health and Sport. Mr Boričić explained the vision and mission of the CEV. This was followed by a discussion around the ways the Scottish Government could help support Scottish Volleyball in their plans in increasing volleyball participation in Scotland and in this Federation’s role in championing female volleyball and the up-and-coming 2024 Women’s European finals. The first ever to be held in the UK and Europe with our partners the Irish Federation.

Margaret Ann Fleming MBE said “it is an absolute pleasure to have our President and 1st Vice-President here visiting Scotland, all the meetings today were extremely positive, with discussions which were deep, meaningful and visionary for our sport. The meeting with both the University, (where our Federation is based) and the Scottish Government was a first for our sport and the CEV President and 1st Vice-President explored, supported and encouraged further partnership work for the future. Volleyball in Scotland is developing into a major force to be considered and our future is looking very bright indeed.”

Sport with the Stars

Saturday 24th August was a multi-sport event that marked the start of the Festival of Sport this year.
General 5th November 2021

Scottish Volleyball are delighted to be hosting another Grade 4 Referee Course, this time on Saturday 27th November at…