For the second year running, Blackpool is hosting the penultimate leg of the European Beach Volleyball Tour  from 9-13 September.

Other GB mens teams competing are Tom Lord and Phil Smith, who won at Portobello this year, Jake Sheaf and Josh Randall, Jody Gooding and Luke Sheaf and Gregg Weaver and Steve Growtowski. The other GB womens teams are Helen Brown and Liane Herbert and Denise Johns and Lucy Boulton.

Keep an eye on results at www.cev.lu, also at the ‘Hots News’ section at the top of this website and also watch live online at  www.laola1.tv.

The week after the CEV event finishes, the World Under-21s get under way, with Perth’s Seain Cook competing in his first International Beach event with Adam Smith. Keep up to date with these results at www.fivb.org.

Scotland’s officials are also represented with Michelle Paterson and Iain Cook down for both events and Sue Kee down for the CEV event.

Good luck to all involved!

“ And the winners of the 2014 CEV U20 Volleyball European Championship Small Countries Division – Men are…..Scotland!” 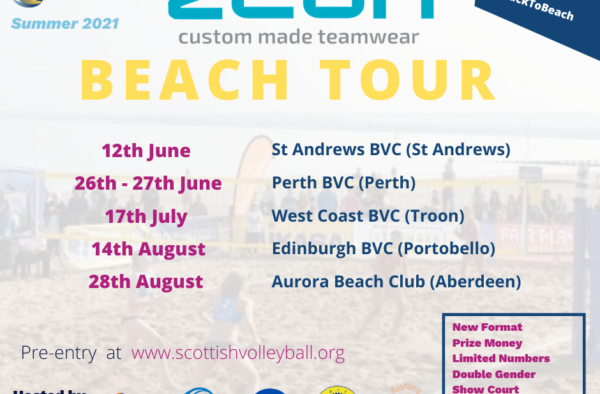 As of today, the registrations to the Zeon Scottish Beach Tour are open!  To participate in our tour, you need…