The first ever Beach Volleyball Tournament took place at Aberdeen beach on the 17th of May. Twenty teams were competing in four categories. Even though this was the first event of the season, the level of competition was very high. The sun shone and this brought out many spectators who, for many, witnessed their first beach volleyball competition and they seemed to be impressed! Organizers are hoping that the Grampian Open Tournament will now be a pernament fixture on the Scottish Beach Tour for future years.

The Men’s events in particular were well attended, with Division 2 honours going to Calum and Ian Taylor with a narrow win in the final against Bob Reid and Rui Jin Ho 20-22, 21-15, 15-8. Colin Sangster and Roman Li taking 3rd place.

In the Women’s competition, Gillian Lyall and Mel Coutts and Shelly Paterson playing with Claire Penny, won through to the final with Lyall and Coutts taking the top honours 21-11, 21-12.

Once again we would like to thank the Grampian Open sponsors: Polish Beauty Salon, Michael Lawson Painter and Decorator, Nobles Leisure Centre and sponsors of the Scottish Tour: Red Bull, Mikasa and Schelde.

Thank you and see you next year.

Scottish Volleyball is delighted to announce in Partnership with Perth & Kinross Council, LiveActive and the Scottish Open Volleyball… 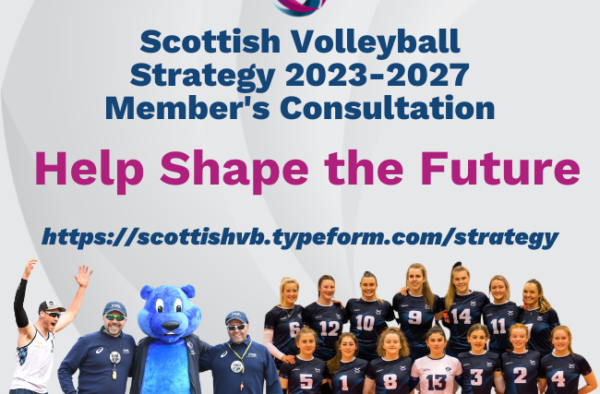 We are now consulting members to help us develop our Strategy for 2023-2027. Your opinions and advice would be…