43 teams turned out for the S2/3 Grangemouth school festival with each of the 170 kids involved excelling in a fantastic festival environment.

The morning pools provided some good competition as the players got settled into their teams and worked hard at controlling the three-touch game. A few of the guests and teachers commented on the atmosphere in the hall. There was a real 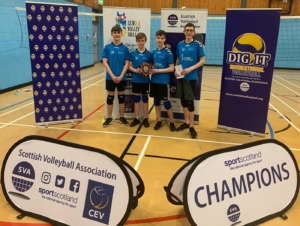 positive vibe being created by the players involved and the direction being given to them by their teachers.

After a morning, which flew by, the pools were redrawn and after a short lunch break the school players were raring to go.

The level of play in the afternoon was highly impressive with lots of games being so close they were decided by the last matches of the day! It was not just the level of the top pool that was impressive as there was no vast gap between top and bottom pools.

Many Congratulations to all pupils and staff of the participating schools, we are already looking forward to next years tournament. A great amount of thanks are due to Blair Pettigrew and Lynne Beattie for their support running such a smooth and encouraging f 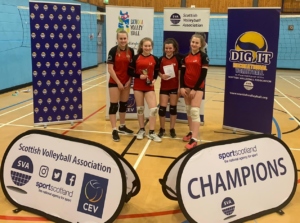 estival. The biggest debt is due to the teachers who continue to amaze by bringing more players every year into the game of volleyball.

The next tournament is the S3/4 Schools Cup taking place at Kelvin Hall in Glasgow on 19th March followed closely by the S1/2 Schools Cup on 24th March which is hosted by the University of Edinburgh. If you would like to find out more information, please visit our Schools Cup & Festival pages.

The Scottish Volleyball Association, due to the current escalation of events, is closing the office starting from Thursday 19th…