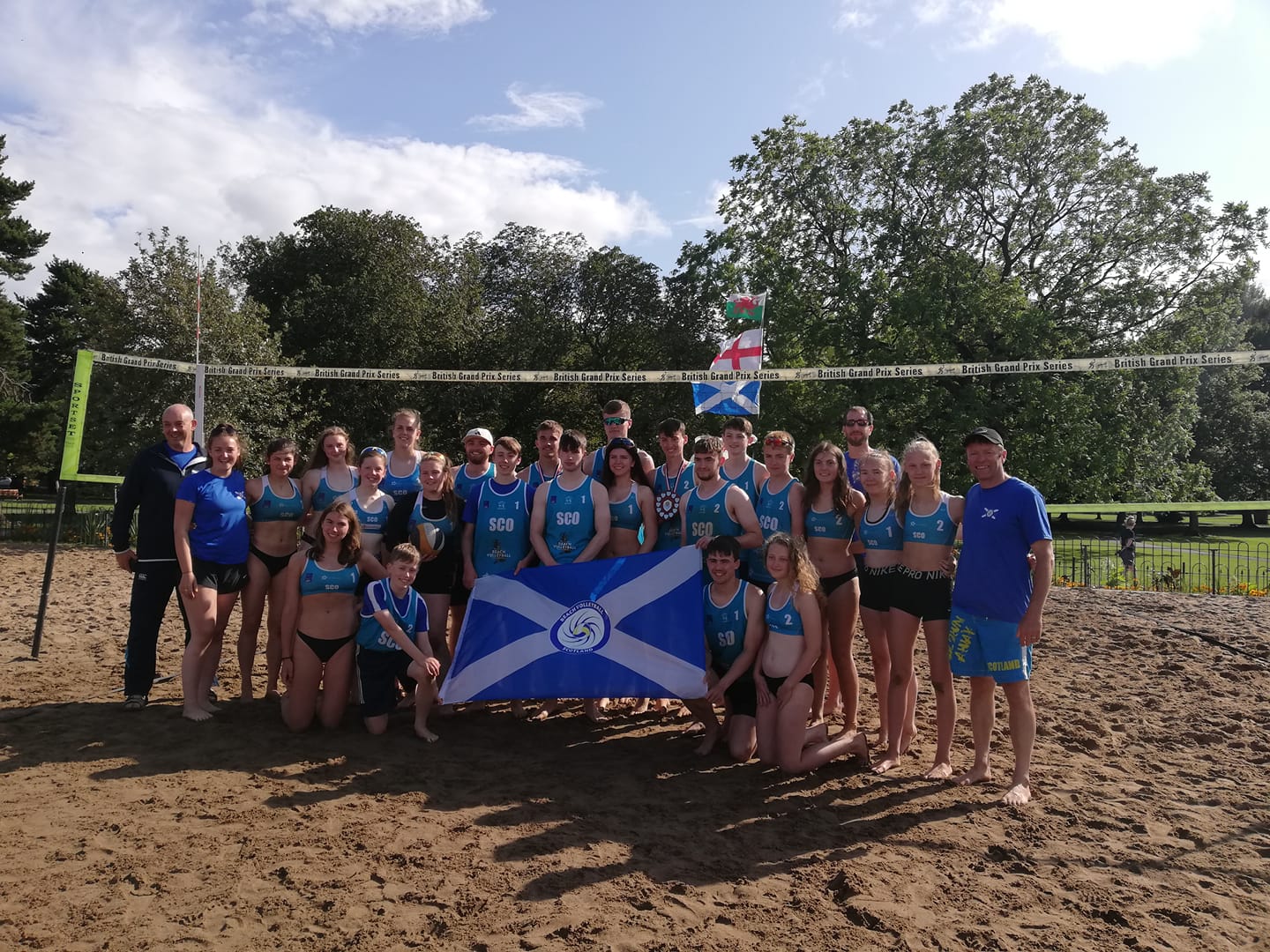 Scotland Men were the winners of the Home Nations Junior Beach Volleyball Championships, held in Cardiff over August 9-11.

The age limit is under 19, although Wales and Northern Ireland were given permission to enter athletes under 21. Three Scotland squads – A, B and C – each made up of two pairs, competed in the men’s and women’s tournaments.

After much deliberation by the coaches and some injury call-offs, the final Scotland squad was:

The tournament format pits each squad against another. The top pair plays the opposition’s top pair, and the second pair then face off against their counterparts. If both pairs win their games they progress, but if one pair loses the match is then decided by a single “Golden Set” of 15 points. Coaches can pick any two of their four players for this deciding set.

After travelling down on Thursday and enjoying an afternoon training session to get their sand legs, the competition started on Friday.

In the women’s tournament, Scotland 1 played Scotland 3, England 2 and Wales in their pool. First up was Scotland 1 versus Scotland 3. Although there were some good plays by SCO3, SCO1 went on to win 2-0 in both matches.

Next up for SCO3 was Wales. The Welsh first team proved too strong for Kelly and Richardson, however Hamilton and Harris gave the Welsh number 2 pair a scare before Wales closed it out 21-18, 21-19.

The men’s event was a close fought affair at the top of the table. Scotland A squad first pair Mexson and Fraser comfortably defeated their Welsh counterparts, but the second pair of Butt and Ritchie lost narrowly (21-15, 21-23, 16-18) to the talented Morgan brothers. This took Scotland to their first Golden Set. Wales split their squad but Scotland put out Mexson/Fraser, who got off to a disastrous start, going 2-7 down. At 9-13 the match looked lost but the pair put on a gutsy display of zero error volleyball to triumph 16-14.

The final placings from pool play were:

Day two of the competition was a double elimination format – lose twice and you’re out of the tournament.

In the women’s competition, SCO3 played Pool B winners, ENG1, and lost 2-0, putting them into the loser’s bracket.

SCO1 played ENG3 at the same time. Wroblewska and Hall played well but narrowly lost 22-20, 21-14 to the first pair. Munoz and Donaldson looked to take it to a Golden Set and took the first set 21-15 but couldn’t keep it going, eventually losing 21-16, 15-11 in the final sets to put them into the loser’s bracket as well.

SCO2 played Wales and another battle ensued, with Waldie and Gillies narrowly losing the first set 21-18 and then capitulating 21-8 in the second. Leavenworth and Ranklin easily took the first set 21-9, lost the second 21-14 but regained their composure to take the third 15-9 to take it into another Golden Set. Leavenworth and Ranklin narrowly lost this 15-13 to also put them in the loser’s bracket.

SCO2 played SCO3 with the winner staying in and the loser going out into the 7/8 playoff. SCO2 won this to keep them in the competition. SCO1 needed to beat Wales to progress to the semi-finals. They overturned their Friday defeat with Hall and Wroblewska winning a nail-biting match 2-1 (21-18, 18-21, 17-15) and Munoz and Donaldson sealing the win 2-0 against the Welsh pair 2.

SCO2 needed one more win against ENG3 to make it to the other semi-final. Waldie and Gillies went down 2-0 to the English pair 1. Leavenworth and Ranklin won their first set but couldn’t sustain the pressure and eventually lost 2-1 (21-13, 15-21, 9-15) to put SCO2 into the 5/6 playoff on Sunday.

The semi-final for SCO1 was against ENG2, which a strong English side won 2-0.

In the men’s side of the tournament, SCO1 faced off against SCO2, with Mexson/Fraser beating Campbell/Crawford 21-8 in the first set before seeing off some fantastic play from the underdogs to win 23-21 in the second. Meanwhile, Butt/Ritchie defeated Reid/Armstrong 21-6, 21,6.

ENG1 took on SCO3, and were too powerful for the young Scots – although Murray and Keir Paterson took England’s second-top team to 21-16 in the first set. SCO3 also lost to Northern Ireland in a Golden Set, with 13-year old Keir and 15-year old Murray Paterson defeating much older and taller NI opposition with an outstanding display of defence.

SCO2 defeated ENG3 in a Golden Set, the new pairing of Crawford/Reid triumphing 15-10, before losing in the quarter finals to SCO1.

In the semifinal, SCO1 beat England’s top squad with the exact same scores of 21-17, 21,11 in both matches to set themselves up for Sunday’s final.

Sunday saw some scattered showers in the morning before things cleared up, with blue skies and hot sun for the final.

In the women’s event, SCO3 played Northern Ireland for 7th and 8th place. Despite some great play by the Scottish girls, they lost 2-0 to finish in 8th place.

SCO2 played Wales for 5th and 6th place, having lost to them in a Golden Set the previous day. Waldie and Gillies battled hard but lost 2-0 (21-18, 21-8). Leavenworth and Ranklin easily won the first set and took the match 21-11, 21-18 against the Welsh second pair to set up another Golden Set decider. Ranklin and Leavenworth, confident after their first match win, took the Golden Set against the Welsh first pair 15-7 to finish in a very good 5th place.

SCO1 played ENG3 for the bronze medal, having lost to them on Saturday 2-0. This time Wroblewska and Hall beat the English first pair 2-1 (16-21, 21-19, 15-13), however Donaldson and Munoz couldn’t beat the English second pair, losing a close match 2-0 (21-18, 21-19) so a Golden Set was needed. There was some confusion over who would play the Golden Set and heated discussions with the referees ensued. Eventually both countries fielded composite teams but it was the English team that came through and won it 15-10 with SCO1 taking 4th place.

In the men’s tournament, SCO 3 lost to England 3 and finished eighth, while Scotland 2 lost to Northern Ireland and came sixth.

The men’s final saw Scotland  1 and England 2 battle it out. Mexson and Fraser were pushed hard but came from behind in both sets to win 21-18, 21,16. Pressure was then on Harris Ritchie and Yusef Butt to clinch the championships. After dominating the first set 21-11, they trailed behind in the second set before a last-gasp push saw them surge past to win 21-18 and become UK U19 Beach Volleyball Champions. Teammates Euan Fraser and Dave Mexson stormed the court after match point for celebratory hugs.

The second Home Nations Junior Beach Volleyball Championships was another fantastic event, despite the weather’s best efforts. Congratulations to all the players for battling through a heavy schedule of matches, sometimes in the wind and rain. Well done to everyone involved, to all our coaches, to our Team Manager Ken Fraser for his invaluable help in organising, to our coaches at the event, Ken, Jack McKeown and Emma Waldie and to all our coaches and parents around the country who encourage junior athletes to try out for the squads and get to the beach for training. Thanks also to Cardiff Beach Volleyball Centre and Carl for hosting us again this year and to Denise for her continued support of Junior Beach Volleyball in the UK.

The 2017 SVA and SCD Beach Season kicked off this weekend at Portobello, Edinburgh with a Women’s Zonal Event.
Beach General University 15th May 2014