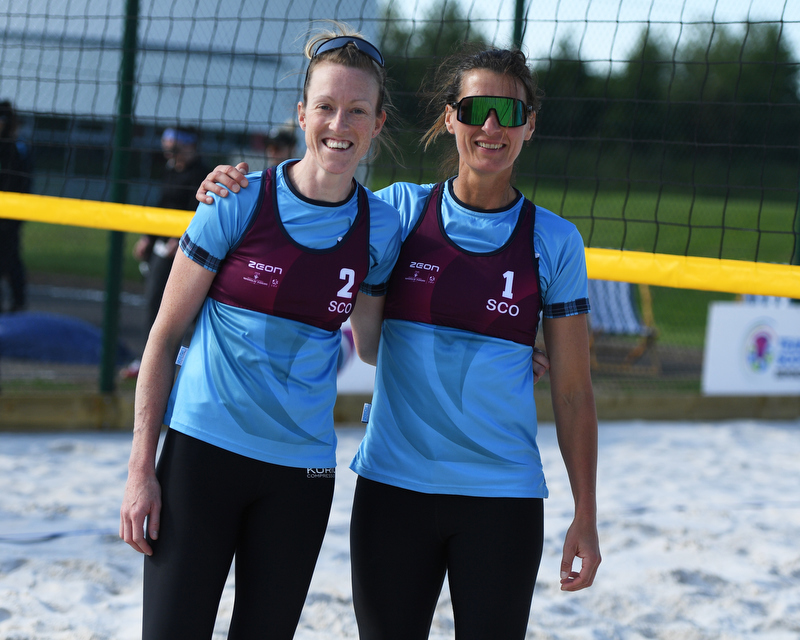 The SCA made an electric debut in the West Coast of Scotland today as the Beach Zonal Event kicked off with pool play for the Men’s and Women’s competitions.

The first matches of the day saw first seed Scottish pair Beattie/Coutts swiftly beat Ireland’s Creighton/McNichols 21-6, 21-5 while England’s Keefe/Tucker eased past the Monegasque pair of Fuentes/Salsedo 21-13, 21-7. The first round of women’s pool play also saw Scots Barbour/McReady beat the Irish pair of Connolly/O’Sullivan 21-15, 21-10. The Men’s first round of pool play followed which included a close game for top seed McKelvie/Stewart who fell 21-18, 21-17 to the Welsh pair Robins/Panah.

The women’s second round pool play produced our first three-setters as Wroblewska/Ranklin just lost out to Fuentes/Salsedo 20-22, 21-17, 15-11 while Northern Ireland’s Paterson/Scott snuck a win over Creighton/McNichols 18-21, 21-13, 16-14. The men’s second round pool play also produced some close games particularly for Northern Irish pair Workman/Scott who earned a hard-fought victory over Scots Souter/Patterson 24-22, 21-13. The final round of Women’s pool play capped the day off to finalise the standings ahead of the quarter finals tomorrow.

It was all go at the national 4v4 festival in Linwood with over 40 teams competing.