The Scottish Volleyball Community is saddened to hear of the passing of enigmatic former Men’s National Team Coach Erik Watson.

Erik, whose mother was from Stirling, was Head of Mathematics at Saltsgarth School in Redcar during his time involved with Scottish Volleyball. He coached volleyball in the Teeside area, leading his team Cleveland VC to winning the English National League in the early Seventies. Looking for more competition for his young North East players, he negotiated with the SVA to bring his junior team to the Scottish Junior Championships at Sighthill in season 1973/74. This led to the inclusion of his senior team, Cleveland Anglo Scots, to competing in the Scottish National League from 1974/75 until 1977/78. He spent time studying with the Japanese National Volleyball team programme courtesy of a Churchill Scholarship award and brought interesting and varied tactics and practices to all the teams he was involved with.

Erik was appointed as Assistant Coach to Nick Moody at the European Championships in Kampen in the Netherlands in May 1977. Nick had asked Frank Leighton to phone Erik to give him the details of the draw & when he told him we were going to Kampen, he said, “Campin`! I thought we`d be stayin` int bloody `otel. ” He then served as our National Team Coach from September 1977 till March 1978 (West European Championships, Bath & Nottingham) seven months during which Scotland played 13 full International matches 6 at home, then 7 in England. I’m sure the members of the squad which included John Scrimgeour, Jake Syme, Kenny Anderson and other top payers of that age would have many interesting tales to relate about his time with the team.

Erik passed away peacefully early on Saturday morning of the 20th June 2020, aged 73, in hospital near his home in Eppleby (near Scotch Corner) to which he had been recently re-admitted during a long fight against illness. He is survived by his wife Carol and daughter Kathryn. Our condolences to all who knew him, a great guy to be around. Whenever old volleyballers, on both sides of the border, gather to swap stories about our time in the game I’m sure a glass or two will be raised in his memory, RIP. 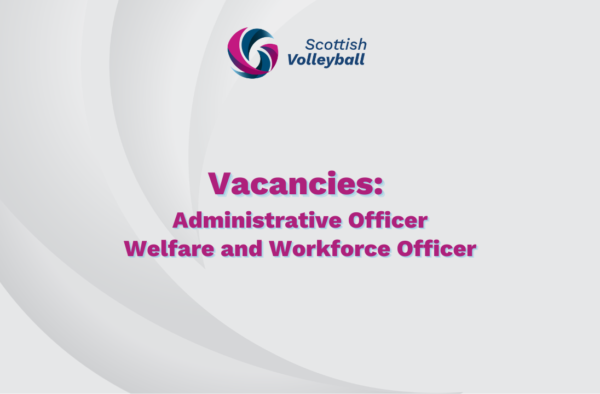 Scottish Volleyball is delighted to announce we are seeking to recruit two new roles, an Adminstrative Officer and a…