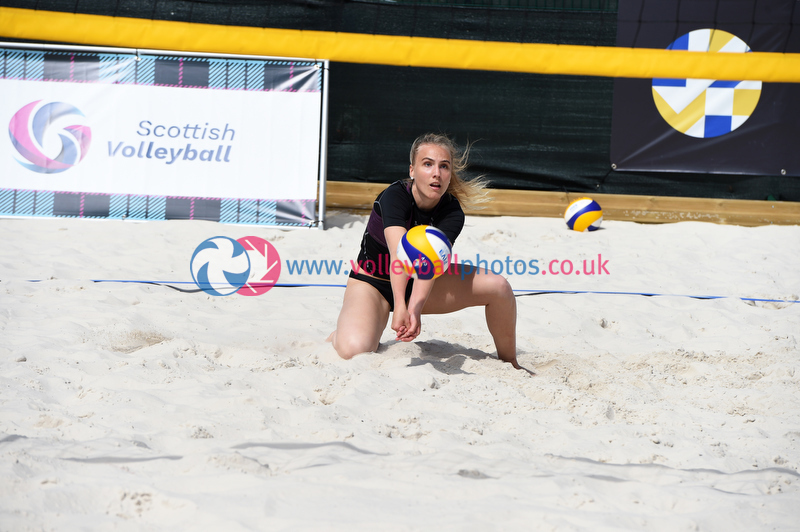 The sun was shining on the final day at the Small Countries Association Edinburgh 2021 at Liberton High School. With a busy schedule of quarterfinals, semi-finals and finals, matches began at 9:00am with the remaining two men’s quarterfinal matches. Stewart and McKelvie (SCO) took on a strong Northern Irish pairing, ultimately coming out as victors with a 2-0 win over Stewart and Scott (NIR). The next match saw Fraser and Mexson (SCO) push Ferry and Ferry (MON) to the limit, with the last set reaching 26-24 before Ferry and Ferry managed the 2-0 win.

Moving to the women’s semi-finals, up first was Morrison and Barbour (SCO), winning 2-0 against Gretarsdottir and Vigfusdottir (ISL) in tight sets. Einarsdottir and Jónsdóttir (ISL) also won in 2-0 sets against England’s Keefe and Tucker. The sun stuck around for the men’s semi-finals, with Kostler and Klaffinger (AUT) bringing the heat against McGuigan and Riddle (SCO) in their 2-0 win. Stewart and McKelvie (SCO) were back on court for their semi-final match against the Ferry brothers, just missing out on the win 2-0.

With 4 matches left in the day, it was all hands on deck for the next to bronze medal matches. Keefe/Tucker (ENG) brought all they could against Gretarsdottir/Vigfusdottir (ISL), but the Icelandic team played strong and managed the 2-1 win for 3rd place. In the men’s side it was Scotland v Scotland, with heated words being exchanged between the two teams before McGuigan and Riddle scored the win 2-0.

Finally, the finals! The women’s final was first up, with Scotland’s Morrison and Barbour (SCO) facing a strong Icelandic duo in Einarsdottir and Jonsdottir (ISL). Both teams played incredibly well, with Einarsdottir and Jonsdottir (ISL) taking the well deserved win 2-0. The men’s match saw Austrian wild cards Kostler and Klaffinger (AUT) up against Ferry and Ferry (MON). With other nation’s teams watching the match, Kostler and Klaffinger (AUT) brought the win home in a 2-0 competition.

Scottish Volleyball CEO Margaret Ann Fleming presented each team with their trophies from a distance. We as an association would like to take this moment to thank all teams and their associations for taking part in this zonal event. In addition, a big thank you goes out to all the staff and volunteers for their help in running this event so smoothly.

KING & QUEEN OF THE BEACH