Day one of the Small Countries Association Edinburgh 2021 International Beach Competition concluded yesterday, with all 15 matches being played over the course of 11 hours.

Starting with seeds number 1, Beattie and Coutts (SCO) played strongly against Northern Ireland’s Ford and Holmes, winning the match 2-0. Quickly followed by an all Iceland affair, Einarsdottir and Jonsdottir made quick work of their opponents, also winning the match 2-0. A classic Scotland v England match followed, with England’s Keefe and Tucker winning against McLean and Fowler 2-0. Scotland and Wales finished off the women’s morning matches, with Morrison and Barbour (SCO) beating Ionascu and Skidmore (WAL) 2-0.

After a quick net change, the men’s matches started off with Monaco’s brother duo of Ferry and Ferry taking on Wales’ Devey and Robins (WAL). Close points resulted in a 2-0 win for the Monaco pairing. Next up was the only Austrian team in the competition, with Kostler and Klaffinger comfortably beating Scotland’s McGuigan and Riddle. Next on the courts was two of the five Scottish men’s teams entered in the competition. Arguably the loudest match of the day, Stewart and McKelvie (SCO) won 2-0 against another brother duo in McHardy and McHardy (SCO). Finishing off the first men’s session of the day was Stewart and Scott (NIR) against Fraser and Mexson (SCO), with the Northern Irish team finishing the battle 2-0.

Back to the women’s matches and the sun was still shining! In their second match of the day Ford and Holmes (NIR) beat Ranklin and Bailie (SCO) 2-1, while Gretarsdottir and Vigfusdottir (ISL) beat Blair and Harris (SCO) 2-0. Waldie and Gillies (SCO) pushed McLean and Fowler (SCO) to the limit, but the elder Scotland team recovered with a 2-1 win. Ionascu and Skidmore (WAL) ended the women’s matches with a 2-0 over Scott/Montgomery (NIR)

Three matches left and we’re back to the men’s teams. Devey and Robins (WAL) won 2-0 against Northern Ireland’s Robb and McCaughern. An experienced McGuigan and Riddle (SCO) won 2-0 against Whiteside and Workman (NIR) as the day drew to a close. The final match of the day saw another all-Scottish match up, with the McHardy duo bringing home the 2-0 win against Boyle and Caldwell (SCO).

VolleyballPhotos spent the day with us at the event, and you can purchase original, unwatermarked pictures from their website: https://www.volleyballphotos.co.uk/ 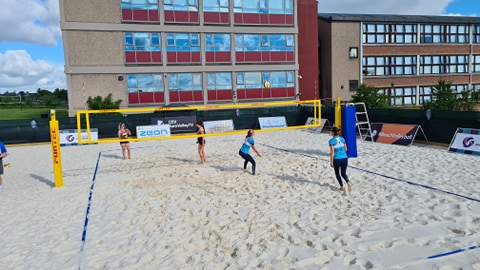 Tomorrow sees teams back at 9:00am for another day on the beach. Facebook will again stream all matches live, which you can find on our Facebook page.

King & Queen of the Beach 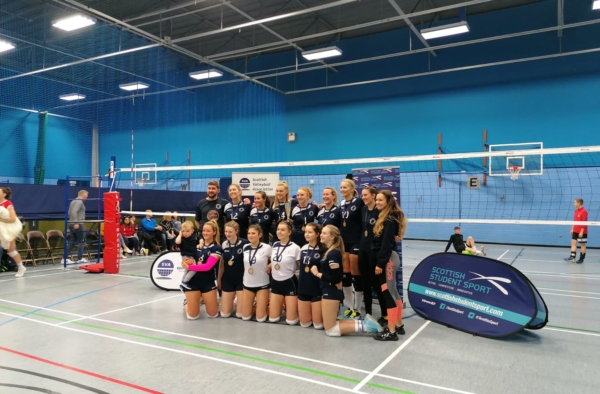 Sunday 9th February 2020 It was a great weekend for volleyball at the Sports and Exercise Institute of Dundee University.…