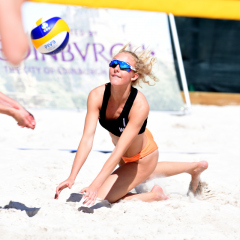 Day 2 started with a bang today, with pool play continuing throughout the morning. Neill and Park (NIR) were up first with our 2nd three set match of the competition, just losing out on the win against Fraser/Mexson (SCO). Dropping the net height we moved to some women’s matches, with Beattie and Coutts comfortably winning 2-0 against Ranklin and Baillie (SCO). Einarsdottir and Jónsdóttir’s (ISL) match followed in a similar way, also winning 2-0 against Blair and Harris (SCO). Waldie and Gillies’ match had a brief interruption with a medical timeout, but after athletes were checked out, the game finished with a 2-0 win for Keefe and Tucker (ENG). The women’s pool matches finished with Morrison and Barbour’s 2-0 win over their Northern Irish opponents Scott and Montgomery.

The Ferry brothers started off the men’s matches, with a 2-0 win over Robb and McCaughern (NIR). Wild card Kostler and Klaffinger (AUT) continued their win streak with a 2-0 over Whiteside and Workman (NIR). Another Scotland against Scotland match was up next, with Boyle and Caldwell (SCO) coming out top with a 2-0 win over Scott and McKelvie (SCO). Stewart and Scott 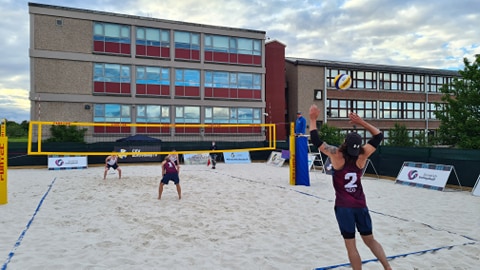 (NIR) finished off the men’s pool play, providing an exciting 2-1 win over their Northern Irish counterparts Neill and Park (NIR).

A three set thriller was up next, with Gretarsdottir and Vigfusdottir (ISL) upsetting home team Beattie and Coutts (SCO) with a 2-1 win. Morrison and Barbour (SCO) quickly dispatched Ford and Holmes (NIR) 2-0, with Keefe and Tucker beating Wales’s Ionascu and Skidmore (WAL) 2-0 shortly after. Einarsdottir and Jónsdóttir (ISL) finished off the women’s quarter finals with a 2-0 win over Scotland’s McLean and Fowler (SCO).

The last two matches of the day were the first of the men’s quarter-final matches. Making it three for three, Kostler and Klaffinger (AUT) won 2-0 against Devey and Robins (WAL). Finishing off the day was a classic Scotland versus Scotland, with McGuigan and Riddle ending on a high with a 2-0 win against the McHardy brothers.

Tomorrow sees the completion of the men’s quarter finals, before moving on the semi-finals and eventually the finals! Make sure to watch out for the live streams on Scottish Volleyball’s facebook page.

As the Grand Duchy of Luxembourg played host to the men’s finals, a meeting of the Small Countries Division… 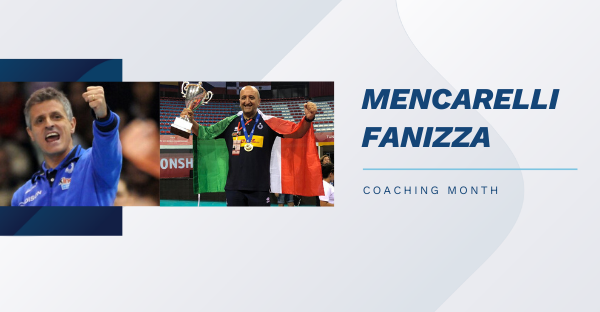 Over the last 2 months due to the global COVID 19 pandemic, the SVA have made a massive effort to…