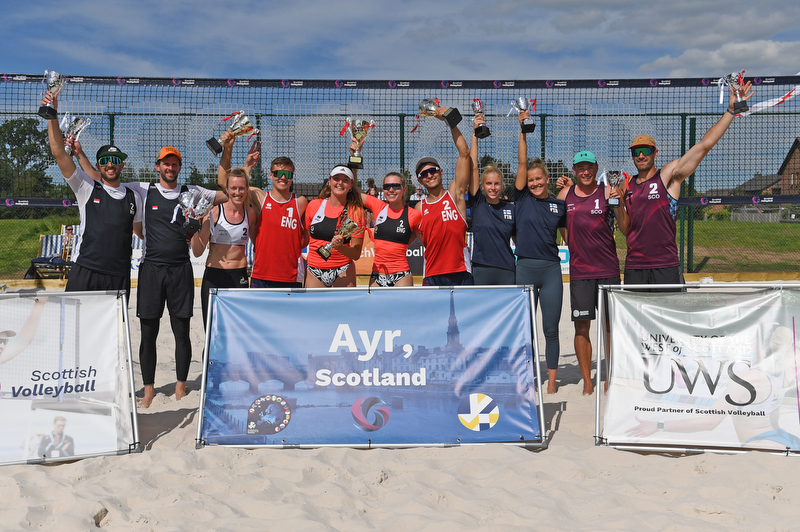 The Men’s Semi-Finals started the day off with Ferry/Ferry reaching their third Scottish SCA Final in 4 years, beating home pair McKelvie/Stewart 21-19, 21-14. Then in an all-English Semi-Final, Gleed/Jones powered past Bello/Soczewka 21-17, 21-11 to earn their place in the final.

The Women’s Third Place Playoff followed with some intense matches. Finns Muukka/Rantala earned a place on the podium, beating Scottish pair Barbour/McReady. 21-11, 21-15. The Men’s Third Place Playoff did not disappoint in an exhilarating match where home pair McKelvie/Stewart triumphed over Bello/Soczewka 23-21, 15-21, 15-10.

Much anticipation awaited the Finals before the Women’s Final unfortunately failed to start due to a medical withdrawal by Beattie/Coutts which left England’s Keefe/Tucker free to claim the crown. The initial disappointment in the crowd was quickly forgotten as an electric clash between Gleed/Jones and Ferry/Ferry lit up the court. Gleed/Jones ended the match on top 18-21, 21-13, 15-12.

An award ceremony followed as podium finishers were awarded their trophies and volunteers and officials were greatly thanked. The event made for an exciting debut and launch of Beach Volleyball at Kyle Academy which has appeared to have hooked the locals! Scottish Volleyball greatly look forward to future events at this exceptional facility.

A special mention goes to Volleyball Photos who have provided us with fantastic photos throughout the event. Please consider purchasing some of their incredible captures as a small token of gratitude.

Great Britain made a good start in the first set, going 2-0 and 3-1 up, and staying level with…
Beach General 16th November 2011