Scotland bloodied but unbowed in Leeds

Scotland’s mens national team returned from England empty-handed but with a sense of satisfaction at the manner in which the team is developing under head coach Simon Loftus.

In a season where the ultimate aim is to qualify for the finals of the CEV Small Countries European Championships, participation in the 2nd Leeds Carnegie Invitational Tournament was seen as integral to cementing the squad into a viable playing unit, with several new faces coming to the fore.

The first match of the event paired Scotland with the hosts, and with coach Loftus taking charge of his club team it was left to assistant coach Iain Parker to call the shots in his first match in overall charge of the national team.  Multiple changes were made in the match, both in terms of positions and personnel, as Scotland triumphed 3-2 (25-20; 21-25; 25-21; 20-25; 15-5) in a game that was more clearcut than the score would indicate.

The Thistles suffered an early setback as libro Barry McGuigan suffered a hand injury less than five minutes into the first set, and was ruled out for the rest of the weekend.  Fielding a free ball, Barry knocked his hand off the floor, and what initially was thought to be a minor sprain emerged as a broken finger and a ruptured tendon in the hand.  Simon Hammond, selected as a swing hitter, deputised as libero and acquitted himself well in the unaccustomed role.

In the final match of the first day’s play, Scotland played their first full international south of the border in over ten years as they took on SCD rivals Luxembourg.  When the two met in January, Luxembourg emerged winners in straight sets, but on this occasion Scotland came out of the traps like a greyhound, and sped to a 2-0 lead.  Key to this was the attacking performance of Chris Lamont, playing in his first match in Scotland colours for several years.  Monty, better known as a middle blocker, was deployed to success in the off-setter role as he sought to regain match fitness after an injury-ravaged season.  With good support from the other attackers, principally Ally Galloway and Callum Green, Scotland took a 16-12 lead into the second technical timeout of the third set, and seemed on the verge of a major victory.

However a disputed line call seemed to affect the concentration, and, already one passer short due to the inclusion of three setters (Alan Krawczyk, Steven Todd and Gavin Watt) in the squad, and further depleted by McGuigan’s injury, Scotland faded to allow Luxembourg to tie the match.  Both teams had chances to seal the deciding set, but Luxembourg, deep in preparations for their senior European Championships tie with Hungary in early May, showed the greater composure to take a 16-14 result in a 2 1/2 hour match.  The other set scores were 25-19; 25-23; 15-25; 17-25.

Team Fife’s Mike Penny, left out of the original squad selection with a niggling shoulder injury, travelled overnight to join the team for the second day as the third libero of the event.  Knowing that overall victory was probably not now possible, Scotland were paired with All-Ireland champions Ulster Elks in their next match.  Holding a 23-17 lead in the first set, Scotland looked comfortable in the match, but a penalty awarded against Callum Green for smashing the ball away in frustration upset the composure and allowed Ulster to steal the set 26-24.

Scotland controlled the tempo of the match in the following sets in particular in the middle of the net where Brian O’Neill, Stuart Edgar and Ruari Isted reigned supreme.  O’Neill and Edgar will be no strangers to fans of Scottish volleyball, but the name of Ruari Isted is a new one to watchers of the national team.  Although born in Inverness, Ruari has played all his cluib volleyball in England, most recently with City of Manchester, and at 6’10” he provides a massive physical presence along the net.  Aided by intelligent shot selection from the setters, Scotland took the next two sets comfortably (25-15; 25-13) to set up a come-from-behind win.

Ulster include the majority of the Northern Ireland national team, and are not accustomed to losing, so it was no great surprise that they threw everything they had at Scotland in the fourth set, scoring a narrow 25-22 win to tke the game into a decider.  Playing their 15th set of the weekend, Scotland had just enough in reserve to break down a stubborn Ulster defence with a 15-13 scoreline for a 3-2 win.

The final match of the event had Scotland up against a young GB development team, with Scottish interest included in the shape of Ally Green and Kenny Barton as match coach.  The GB team’s game is centred around solid defence and fast attacks, and they stunned the Thistles with a first set 25-23 win.  Scotland knew they had a potential bananaskin on their hands, but were professional in their outlook to turn the match around, winning 3-1 (25-19; 25-21; 25-17).

The squad for the event was

The next on-court appearance for the team will be at the Scottish Open in Perth at the end of May, with players seeking to make an impression to gain selection for the European Championships in Andorra in June. 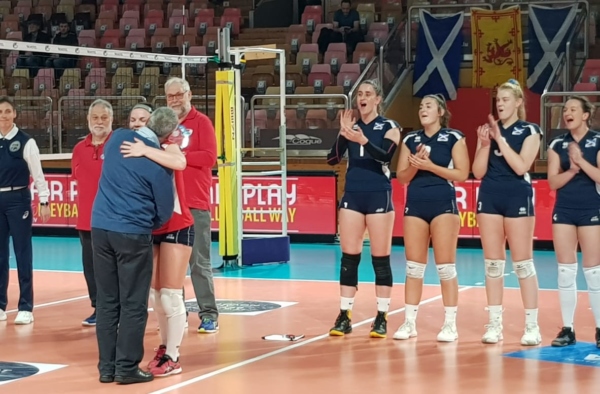 It was a tough beginning for our National Teams competing in the Novotel Cup in Luxembourg, but there were…