The schools cup competition has been waiting 24 years for its next round of winners and on Tuesday 31st March at Coatbridge High School & Thursday 2nd April at Coltness High School we met those people!

The girl’s finals night was excellent. Marr College from Ayrshire and Stonelaw High School from Rutherglen made up the first two finals, at the P7/ S1 leveland S2/3 level and Marr & Belmont High School, also from Ayrshire contested the senior girl’s final. The P7/ S1 final was a tight affair with a lot of good play from both sides and in the end Marr edged the match 2-0. The S2/3 final was, again, hotly contested by both Sides but this time Stonelaw ran out 2-0 winners.

Then the senior girls arrived on court. An Ayrshire derby being played in Coatbridge!! With nine Scotland u-19 internationals on the court this promised to be an exciting encounter. In what was a very tight match that could have gone either way, Marr edged the final by 2-0 and were the strongest of the two sides from the service box. The atmosphere generated was incredible and with a very large crowd of enthusiastic people witnessing these finals it made the evening a very special one for all those involved.

Two days later the band wagon rolled onto Coltness for the Men’s finals. Auchinleck High School and Kyle Academy, both from Ayrshire  contested the P7/ S1, Lesmahagow High School from South Lanarkshire & Marr College contested the S2/3 and Stonelaw & Belmont were to fight it out in the senior boys final. The P7/S1 final witnessed some excellent volleyball but in the end the more tactical  serving from the Auchinleck team saw them run out 2-0 victors. The S2/3 final witnessed a very strong and controlled game of volleyball from Marr, and whilst Lesmahagow competed with passion and determination, the superior hitting weight produced by the Marr players was the determining factor. Marr College ran out 2-0 winners, much to the delight of coach Jess Reid.

The senior boy’s final was full of tension and energy as Stonelaw and Belmont battled it out. In a game that offered bothexcitiment and high quality volleyball Stonelaw recovered from  a dramatic first set loss to win 2 – 1.

I would like to thank all the players, coaches and supporters for filling the finals night with passion and excitement. The Volunteers who helped with refereeing, PA, photography and court management, North Lanarkshire Council for providing two excellent facilities and the staff at the Scottish Volleyball Association for the help and support provided throughout the last year. 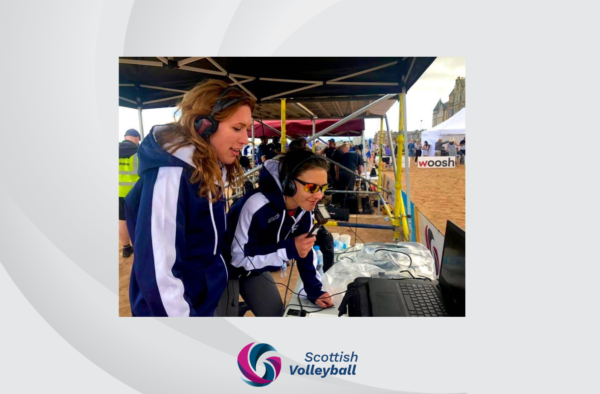 Kennedy on the World Stage!

Kennedy Mason, key volunteer for Scottish Volleyball and player for Edinburgh University, was one of our lead commentators at…
General 5th June 2016

A celebration of volleyball inclusivity