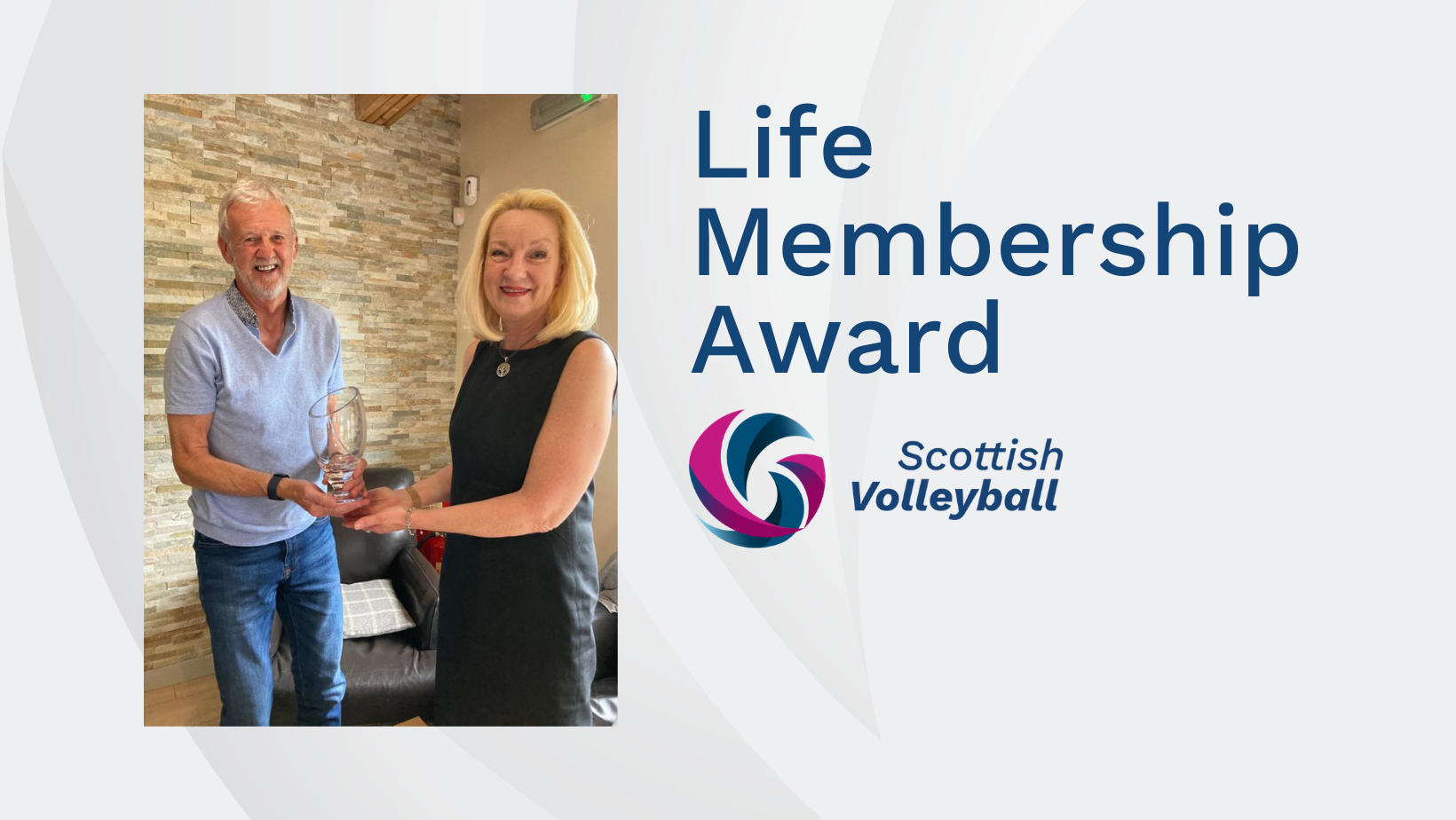 CEO Margaret Ann Fleming said “To present John with this Lifetime Membership Award on behalf of the Board and membership was my honour and privilege. This award has gone to a person who has the word volleyball and our sport running through his veins! He has dedicated his whole adult life to the development, delivery, and enhancement of Volleyball both in Scotland and in Great Britain. As a teacher, player, coach, staff member and volunteer John has always gone up and above to make volleyball Bigger, Better and Stronger. Our new vison is one of “Becoming Great Together” John typifies this both as a person and as a friend to all in Scottish Volleyball – Congratulations”.

Resume of John’s involvement and achievements!

John’s first introduction to volleyball was in 1969 when his PE teacher Tom Hermiston attended a course run by Eddie Still and John played volleyball at Morgan Academy in class lessons. John was a basketball player but joined the volleyball club which was mostly girls and 4 boys. He was in the Scottish Schoolboys team that took on an England Schoolboys team at Meadowbank in 1971. John did not get on the court but was hooked. He then completed his first coaching qualification, Level 1, at SSPE, Jordanhill College in 1973.

John taught for many years in Dundee and ran successful teams at Harris Academy and encouraged many players to join the National League clubs in Dundee and for recreational play in the local District League. Several players played National League for Dundee. He introduced volleyball into curriculum at Craigie High School, with teams winning local events during his 26 years as Principal Teacher of PE.

John played his first competitive game for Dundee on 7th May 1971 against Dalziel in the Scottish Cup. He also played for the college team from 1971-74 and won Division ll in April 1974.  During his time at Jordanhill he won his first National Team cap against Austria in Vienna in October 1973. At this time John was an outside hitter and continued his National Team career in that position. He returned to Dundee for the start of the season 1974/75.  Frank Leighton who had helped organise the school club was the captain of the National Team and was the coach of Dundee Kirkton. After league success John took over as club coach in season 1990.  He also changed from hitter to setter at the start of season 1992/93. John continued to play and coach until December 2013.  His last game against Beacon in December 2013 was game number 1294 played over a period of 42 years! Since then, John has continued as club coach for men and women.

John had an extensive National team career which finished in Portugal, March 1986 with a match against Porto. John won his 50th cap V Kenya at the Commonwealth Championships in Bradford in 1981. In total John won 73 caps and finished as a middle hitter, having been converted to this position during the West European Championships in Israel by Nick Moody.

After finishing his National Team playing career John joined the NT coaching staff.  John has been involved with both junior and senior teams since then as assistant to Nick Moody and Thomas Dowens MBE. Thomas and John started the preparations for the 2012 Olympic team in 2005 with camps around Britain, Sheffield, Glasgow, Hayford and south France for 21 days.

John took over the role of interim Coaching Manager for Scottish Volleyball in October 2018 when he had retired after 44 years as a PE teacher.  He is still involved with the day-to-day workings of the office delivering specific projects on our behalf. He also has been a member of the Coaches Commission for more than 12 years and currently is the President of this Commission.