The event area preparation for the St Andrews Beach Volleyball championships is traditionally completed on the Friday evening. And along with those who set up on the morning of their events I have always dreaded the prospect of rain during this preparation phase. With just cause, this year we created the event in the rain (wind and eventually dark). What a nightmare, especially erecting the impressive marquee, which was new to us, in a squall, in the near dark, never have I felt so much like Scott of the Antartic. But you know what? All the people who promised to assist turned up. Boy am I indebted.

The draw for the Championships were promising. In the Buff Men’s Championships, Gavin Watt and Colin McNab were deservedly seeded No1, Graham Riddle and Konrad Krawczyk seeded 3, and Barry Robertson has shown that Beach Volleyball has to be learned. Barry and Marek Mrowka have climbed the seedings over the past three seasons, and for St Andrews they were now seeded 2. And seeded down at 13 was Gordon Teoh, so good last year, and back after a year of Berlin indoor Beach Volleyball partnering GB Beach player Seain Cook. Upsets could be on the cards.

One of the major attractions at the St Andrews Championships is the John McPhail original trophies. Two years ago it was a sculpted figure digging, last year volleying and this year it was a sculpted server. Three people, Graham Riddle, Mel Coutts and Gillian Lyall have won the first two figures, but this year Mel and Gillian split into different teams, Mel with Eilidh Smith, Gillian with National indoor team captain, Lyndsey Bunton. Someones run of championships wins had to come to a end. And with Gordon Teoh bringing German Beach pair Katrine Klienhart and Jana Gotze to St Andrews, the possibility was the Women’s trophy could go abroad.

Day 1- Saturday concludes the Div 2, Wilson Junior men and Wilson Junior women and the recreational 4’s. It was good to see Louise McGinlay, winner at Wilson junior women’s last year making an impression in the Buff Div 2 women’s with new partner Jessica Brennan, runners up to St Andrews Div 2 winners Dianne Ferry and Roxanna Hunter. Sarah Driscoll and Cassandra Mackay won the Wilson Junior Women while Linlithgow were again triumphant in the recreational 4’s. The Wilson Junior men Championship was won by the gifted Edinburgh pairing of Mathew Agius and Jed Hunter. The best competition of day one was in the Buff Men’s Div 2, where recreational players of last year, Rodger Baillie and Darius Slavek were runners up to Beach Volleyball enthusiasts Colin Sangster and Roman Li, the 2009 Buff Div 2 Men’s Champions.

There was no rain during the entire Championships, but the wind and less than glorious sunshine still came as a shock to the German team. As was the winning of pool 2 by 4th seeds, Shelly Paterson and Karen Grossart. This forced a countback of points won over points lost between Kleinart/Gotze and Lyall/Bunton. Resulting in the German girls going through to the Buff Championship knockout draw, Gillian Lyall’s winning streak at St Andrews was over.

Day 2-On the Sunday knock out, Gotze and Kleinart were defeated 21-18, 21-11 by Coutts and Smith. Paterson and Grossart finaled with a 21-18, 15-21, 15-10 over Claire Penny and her new partner, Ashley Dennis, Penny and Dennis showing real promise in their first tournament as a team. Coutts and Smith won the first major of the Sunday, 21-12, 21-9 to become the Buff St Andrews Beach Volleyball Champions 2009. Congratulations to Mel and Eilidh on winnng the Buff St Andrews Beach Volleyball Championships. We really need some of our other indoor women’s players to overcome the difficulty of adapting to the Beach game and step up the challenge to Mel and Eilidh.

The Buff Men’s Championships demonstrated the rise of Scottish Beach Volleyball. First up, Riddle and Krawczyk took three sets to overcome Teoh and Cook, 21-9,15-21, 15-6. To meet McNab and Watt in the final, who won 19-21, 21-19,16-14 against Robertson and Mrowka. Quite a few indoor players have either struggled on the beach or have yet to attempt it. Barry and Marek have shown that indoor players can succeed at both disciplines, but you have to work at it. What an appropriate final, all weekend the men’s tournament saw a clash of tactic, a dominant blocker at the net covered by a fast back court player- Harvey and Harris, Robertson and Mworka, McKeown and Jensen, Cameron and Graham against two ‘universal’ players, sharing blocking and cover- Teoh and Cook, Ricci and Johnstone, Traylor and Parker, Humphrey and Cook. The combination of Graham Riddle’s quickness and Konrad Krawczyk’s blocking was enough to edge out the final with a 21-18,21-19 win over Colin McNab and Gavin Watt … what a weekend of Beach Volleyball.

St Andrews Beach Volleyball Championships is a quality event in a prestigious location. It would be impossible without the assistance of non volleyballers, Kate Hughes and Robbie Blyth of Fife Council, Ewan Roberts of 1, Golf Place and John McPhail who produces trophies for the event that all volleyball players instantly recognise as characterising the uniqueness of our sport. John donated a trophy for ‘Spirit of the tournament’. And although there were many nominations for this, the award went unanimously to photographer Dave McEwan, another great supporter of Scottish Beach Volleyball.

I am indebted to those who set up the competition arena on the Friday evening. Bob Stevenson, Gordon Teoh, Ben Taylor, Jack McKeown, Ben Buzza, Scott Bell, Tim Humphrey, Louise McGinlay and Tony Thornhill. And to every competitor who packed up courts and equipment after Sundays finals go more thanks.

The Saturday is a brilliant day of Beach Volleyball. Fourteen courts, all supporting pools of teams, all sending in results, score sheets, differing courts, my final thanks go to my wife Claire, who organises this hectic stage of the tournament. Without Claire’s organisation there would be no results. 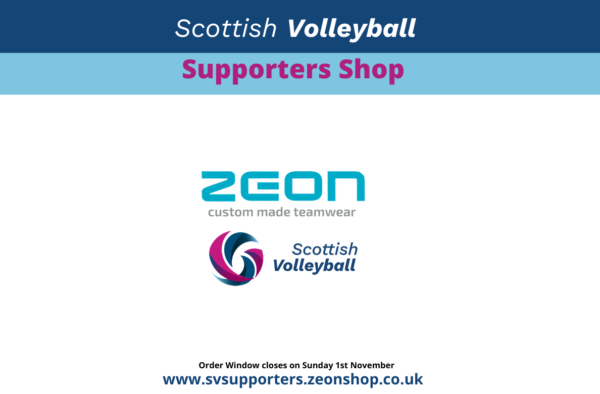