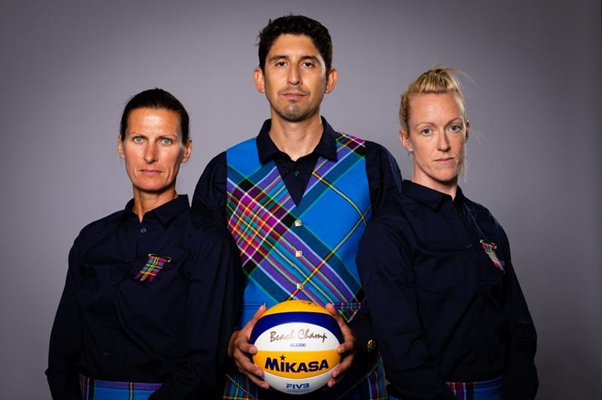 With just one hour until the Birmingham 2022 Commonwealth Games opening ceremony, we cannot wait to see our team in the Team Scotland parade outfit. Athletes Lynne and Mel, head coach Felipe, and team manager Doug will don the iconic tartan, designed by Scottish fashion designer Siobhan Mackenzie, which incorporates colours synonymous with both Team Scotland and Birmingham 2022.

The opening ceremony will be aired live on BBC One from 7 PM tonight. Tune in to catch our athletes and team celebrate the beginning of these exciting games.

The tartan was woven by the Lochcarron Mill in Selkirk, with all other components manufactured locally and using traditional methods where possible.

Designer Siobhan Mackenzie said: “It’s such an honour to be involved in the design of the outfits. We consulted with the committee and athletes’ panel to make sure it was something they were going to be happy in, and we’ve been delighted with the reaction we’ve had from the athletes so far.”

“I played around with the scale of the tartan, which is the main aesthetic feature of the final pieces, and the devil’s always in the detail, with little touchers across – buckles, buttons, linings and stitching colour.”

“It’s a contemporary take on tradition and, importantly, is made in Scotland using traditional methods”

“It’s such an honour to be involved in the design of the outfits – I really can’t wait to see the athletes emerge into the stadium wearing them.”

A Week in the Life of the SWNTP: Turning Up The Heat