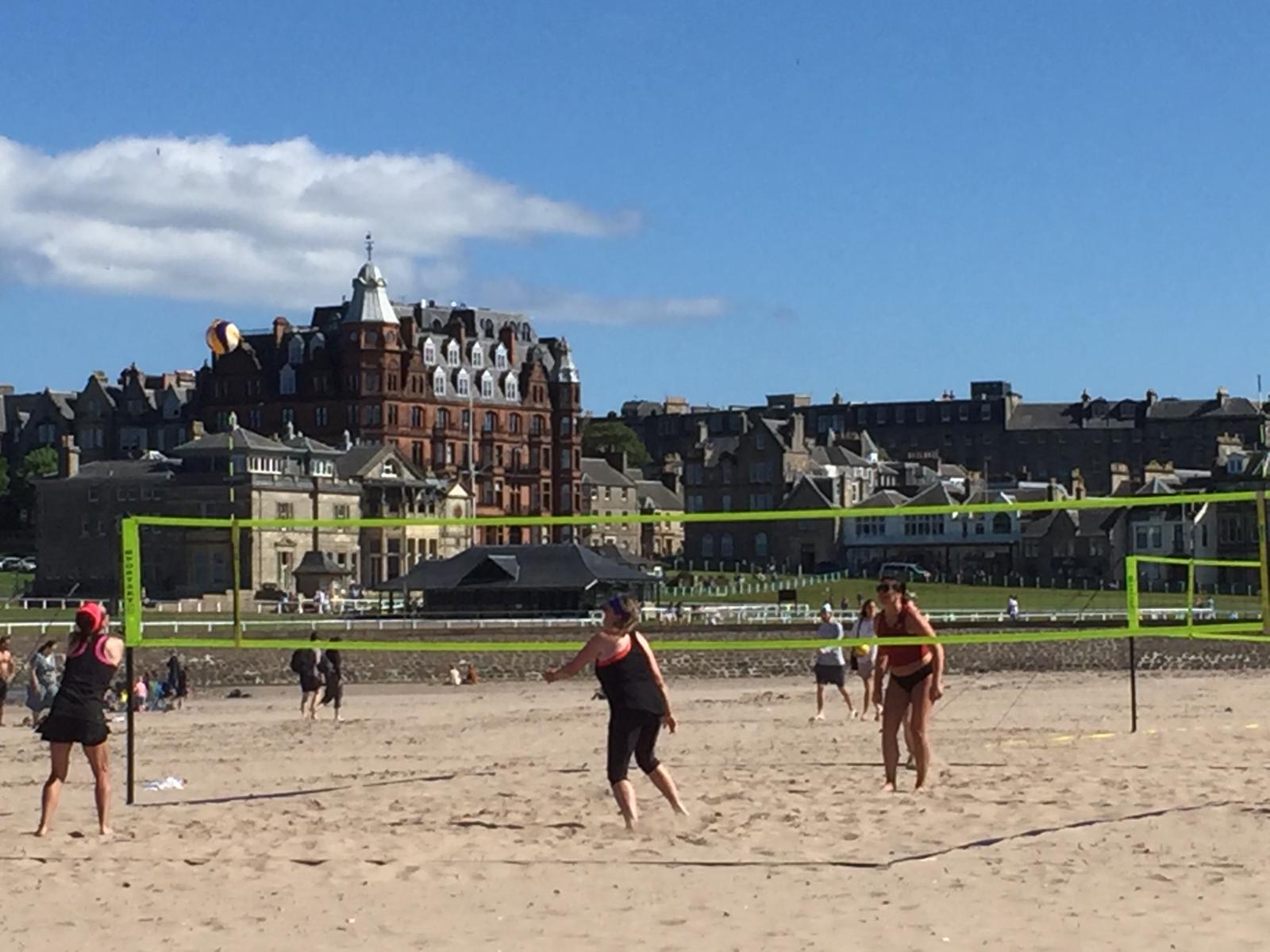 St. Andrews Beach Volleyball Club hosted the first tournament of the beach volleyball season and it was a great success. Keep on reading to find out more about the highlights of the matches:

The 2021 Zeon Scottish Beach Tour kicked off at St Andrews on Saturday June 12.

Fifteen men’s teams and ten women’s teams duked it out under blazing skies and temperatures in the mid 20s.

In the men’s bracket top seeds Konrad Krawczyk and Eddie Gorecki cruised through to the semifinals before meeting a stern test in the all Italian pairing of Fabio Avesani and Noah Candeli. The skilled younger team dominated the first set, taking it 21-15. Gorecki and Krawczyk snatched the second set 21-19 before taking control in the third with a 15-10 score line sealing the win.

The other half of the draw saw the Polish-German pairing of Jan Zavacki and Jan Kiefer nudge past third seeds Jack McKeown and Murray Paterson with a razor thin three set victory that was the closest match of the day. In their semi-final they pushed the talented young Scottish pair of Jack McKelvey and Harris Ritchie all the way, succumbing 21-17, 23-21.

This set up a final of youth versus experience, with the older Poles facing the youthful Scots. McKelvey and Ritchie drew first blood, taking the first set 23-21 but lost the second set to 19 points setting up the decider. Some outstanding blocking from Krawczyk and hard hitting from Gorecki was more than offset by the defensive wizardry of McKelvey and Ritchie, who took their first Scottish Tour victory 15-10.

The women’s tournament was another hard fought event. Top seeds Sam Fowler and Tya Mason proved two middle blockers can be a formidable pairing on the sand, a single set dropped in the pool stages the only hiccup on their path to the final.

Aitana Verdu Schlie and Kennedy Mason blasted through to the final with a clean sheet, their refusal to let the ball hit the sand ensuring no team took more than 17 points from them.

This set up a mouth watering final of two power players against a pair of outstanding defenders. Fowler and Mason struggled to find their groove in the first set, with Verdu Schlie and Kennedy holding them to just 13 points. They rallied to take the second set with a hard fought 21-18 victory. Some astounding rallies took place in the third, with Verdu Schlie’s pace and athleticism eventually securing a 15-11 win to take top spot in the tournament.

The quality of both finals after a full day of play under the hot sun is a testimony to the players’ high levels of fitness.

Let’s hope the good weather holds for the rest of the beach volleyball season.

Beach Volleyball is making only its second appearance at the Youth Olympics since its inclusion in Nanjing, China in…
Beach General 2nd June 2010